Features
On This Day
16 June: Spohr’s Concerto for Clarinet and Orchestra No. 1 Was Premiered
by Georg Predota June 16th, 2022
Tags: Spohr 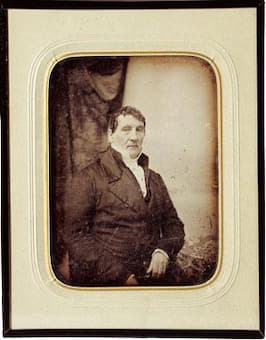 When it comes to collaborations between clarinetists and composer we quickly think of Mozart and Stadler, Weber and Baermann, and Brahms and Mühlfeld. In my opinion, these pairing should also include Louis Spohr and Johann Simon Hermstedt. Hermstedt was born in the town of Lagensalza in 1778, and he was essentially an autodidact. By 1797 he was appointed to the regimental band of Prince Clemens in Langensalza, and on a trip to Dresden in 1800, the band played for Duke Guenter Friedrich Karl I of Sondershausen. The Duke was mightily impressed and made Hermstedt the leader of his newly formed band in 1802. Hermstedt might have furthered his studies with the great clarinet virtuoso and teacher Franz Tauch, and he first met Louis Spohr in 1808. The Duke sent him to Gotha, where Spohr was leader of the orchestra hoping to commission a work for clarinet. Spohr recorded his first impressions of Hermstedt in his autobiography. “Hermstedt appeared as clarinet player and attracted much attention by his admirable performance. He had come to Gotha to request me to write a clarinet concerto for him, for which the Prince offered to pay a handsome gratuity. To this proposal I gladly assented, as from the immense execution, together with the brilliancy of tone and purity of intonation possessed by Hermstedt, I felt at full liberty to give the reins to my fancy.” 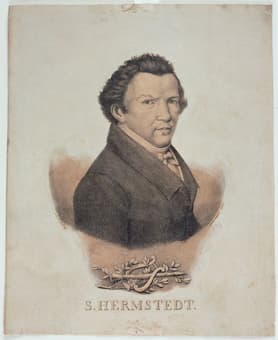 Spohr writes, “After I had with Hermstedt’s assistance made myself somewhat acquainted with the technique of the instrument, I went zealously to work and completed it in a few weeks. Thus originated the Concerto in E minor, published a few years afterwards by Kuehnel as op. 26, with which Hermstedt achieved so much success in his artistic tours, that it may be affirmed he is chiefly indebted to that for his fame.” The first performance took place on 16 June 1809 at Sondershausen, Thuringia, with Hermstedt playing the solo and Spohr leading the orchestra. It was an enormous success and cemented Hermstedt’s reputation as the leading clarinet virtuoso of the day. But equally important is the fact that Spohr’s Clarinet Concerto No. 1 affected important changes, improvements and developments in the instrument’s design. Spohr was familiar with the range of the clarinet, but he knew little about its strengths and weaknesses in different registers. Working with Hermstedt, Spohr was willing to adjust the score, but the clarinetist did not want to change the music. As such, Hermstedt collaborated with the instrument maker Heinrich Gottlieb Streitwolf of Göttingen and modified the German-system clarinet by “increasing the number of keys from five to thirteen.” Spohr reports, “My knowledge of the instrument was more or less confined. However, Herr Hermstedt sought to perfect his instrument, and by constant application, soon attained such mastery that his clarinet produced no more jarring, muffled or uncertain notes.” 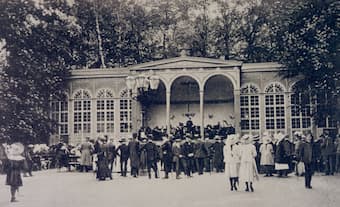 Hermstedt was a contemporary and rival of Heinrich Baermann. Baermann’s playing was described as “elegant and graceful, and as demonstrating extraordinary manual development, but found fault with the fact that his runs approached that, which in painting is called sterility; his tone was uneven.” Hermstedt, according to critics “played with great style and did not aim for vain, aural titillation, as his virtuosity was joined by beauty and smoothness of tone, consummate purity and tender, never sentimental cantabile playing.” 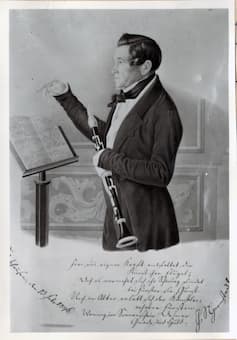 After hearing both Hermstedt and Baermann perform within a week of each other in Frankfurt in 1819, a critic proclaimed, “I have heard several gifted clarinetists, even the greatest of the present… Hermstedt surpasses them all.” There can be no doubt that the technical innovations in terms of instrument construction and interpretive style practices by Hermstedt had a profound influence on the concertos of Spohr. As the composer writes, “May this 1st concerto for the clarinet, surely the most perfect of all wind instruments if played in the way Herr Hermstedt does, avoid the monotony of most existing clarinet compositions, which largely consists of the repetition of technically simple and terribly trite soloistic passages, and to look for wider fields for an instrument so rich in compass and expression.” Such was the mastery of Hermstedt’s playing that Spohr composed a further three clarinet concertos for him.