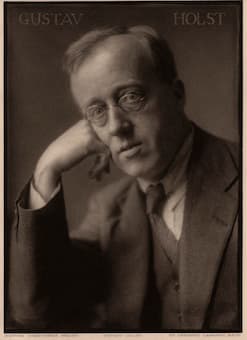 Named not for the cathedral but for the girls’ school in Hammersmith where he was music master for nearly 30 years, the St Paul’s Suite by Gustav Holst provided the students with a beautiful piece that was all their own. Dedicated to St. Paul’s Girls’ School Orchestra, it was his first work for the school. Originally written for string orchestra, he later made a version that included woodwinds so other students could join.

Written in 1913 and published in 1922 after revisions the 4-movement work starts with a lively jig.


The second movement ostinato provides a sturdy base against which a viola solo starts with its melody then taken up by the second violins. Pizzicato and other string techniques liven the movement.


The third movement Intermezzo gives us a sharp change of key and mood. The movement starts with a pizzicato in the lower strings before the solo violin takes the main theme and then plays in duet with the solo viola. A brisk Allegro changes the mood again – away from the minor and into a playful skittishness.


Building on a movement of his earlier Second Suite in F for Military Band, the final movement starts with a 16th-century folktune known as The Dargason, and then, after its first iteration, combines it with another old English tune, Greensleeves. The two melodies run at different speeds: the fast Dargason running past the slower Greensleeves until at the end both run quickly together.


In creating work like this for a girls’ school, Holst has managed to make it both musical and didactic. The changes between the movements and the way the third movement changes character with the Allegro section make this not only a small symphony and its standard Fast-slow-dance-fast movements. The use of traditional English melodies keeps it simple and the end result is a pleasant piece of light music. Fellow composer Ralph Vaughan Williams considered him not only a good composer but a great teacher.