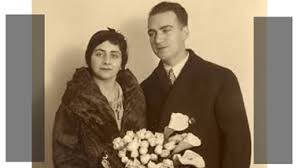 On 14 March 1928 a concert honoring Manuel de Falla’s admittance to the French Légion d’Honneur took place in Paris. Falla insisted that music by some of his young Spanish colleagues should be heard as well, and Joaquin Rodrigo stole the show. A reviewer reports, “At that concert we admired both the spectacular piano performance of Joaquín Rodrigo (who lost his sight due to a grave childhood disease) and the dazzling way in which he composes for the piano.” Rodrigo’s compositions quickly attracted the attention of a number of eminent Spanish pianists, among them José Iturbi, Joaquín Nín and Ricardo Viñes. As it happened, Viñes was teaching Spanish piano repertoire to an exceptionally talented pianist from Istanbul. Victoria Kamhi Arditti was the daughter of Sephardic Jewish parents belonging to the cultural and economic elite of the Turkish high bourgeoisie, and she had started her piano studies at the age of four. Since her mother was Viennese, Victoria first furthered her studies in Vienna before moving on to Paris. She personally met Joaquín Rodrigo in 1929, and fell in love with his music. “First with his music and later with him.” 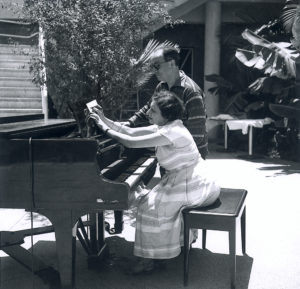 Love is one thing, but the economic realities of a young composer with a severe disability struggling to make his way in the world seemed insurmountable. The relationship faced stern objections from parents, friends, and colleagues, and was characterized by periods of deep personal reflection. But in the end, love managed to clear all obstacles. Victoria writes, “on a gray November day I had taken the train to the Spanish border. In Barcelona Joaquín and his older brother, Paco, were waiting to welcome me to Spain. As we followed the highway to Valencia, I was lost in admiration of the picturesque little villages we passed through, and the exuberant vegetation. Everything seemed strange to me, the people, the customs, and the activities. I was surprised to see so much luxury, such abundance, in the house of my future parents-in-law.” They started to prepare for the wedding in the “strictest intimacy,” and the happy event took place on 19 January 1933. But the financial struggle continued. Initially they settled in Valencia, but when Rodrigo composed “Song of the Bride” in 1934, which he considered his best vocal work, it was “a very difficult time of our life when, after just one year of marriage, we had to be separated for economic reasons.” 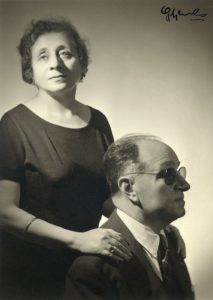 Eventually Rodrigo was awarded the “Conde de Cartagena Scholarhip” allowing him to join his wife in Paris. Victoria gave up her career as a pianist to devote all her efforts to the works of her husband, collaborating with him in musical and literary matters. When the scholarship was initially renewed, the couple decided to spend some time in Germany. However, with the outbreak of the Spanish Civil War in 1936, the scholarship fund was no longer available and they had to find refuge at the Institute for the Blind in Freiburg. Three years of extended hardship finally came to an end in 1939, and Rodrigo completed his most famous composition, the Conceirto de Aranjuez. Victoria writes that shorty after the premiere of the concerto on 9 November 1940, their daughter Cecilia was born. “And what about her eyes?” Victoria asked weakly. “They’re magnificent, blue.” 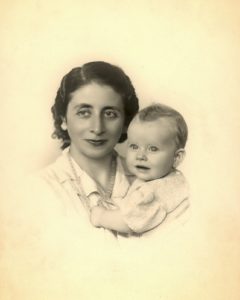 Victoria Kamhi de Rodrigo played a crucial role in her husband’s later success as a composer. She wrote the scripts for his ballets “Pavana Real” and “Juana y los Caldereros,” and adapted the texts from the Dead Sea Scrolls. Kamhi was fluent in five languages, and she authored German and French versions of her husband’s vocal music.
She also penned her memoirs in 1986 published under the title “Hand in Hand with Joaquin Rodrigo. My life at the Maestro’s side.” Kamhi helped Rodrigo to develop an individual and distinct musical style, and she was his constant companion and inspiration. She took over a wide range of musical responsibilities, including managing his career. Rodrigo tenderly wrote, “My wife Victoria, my faithful companion and collaborator, has been my inspiration and my drive, she has given me confidence in myself and unending love, and she has dedicated her life to me and has been the light of my eyes.” Kamhi died in 1997, two years before her husband; they are both buried in Aranjuez.