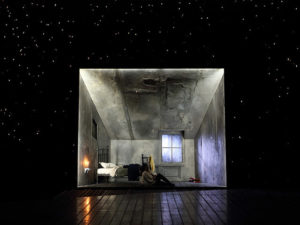 French director Benoît Jacquot’s production (Revival Director Andrew Sinclair) dates back to 2004, and has had at least two revivals at the Royal Opera House. It remains as insipid and drab as at its first showing and it is hard not to think what a more operatically seasoned director such as Damiano Michieletto (not to mention the late Franco Zeffirelli) could have done with this classic story. 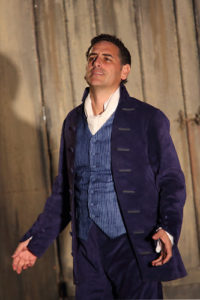 Jacquot sets the first act in a soulless interior courtyard in a village near Frankfurt (sets by Charles Edwards). But outside the slightly dilapidated gates of the mayor’s home, an immobile cloud canopy looms, making it hard to understand why the young poet Werther would be “overcome by the beauty and tranquillity of the surroundings” (as per the ROH program notes).

This unmoving cloud backdrop is again used in the second act’s church scene, which plays in Wetzlar. With the period costumes (Christian Gasc) against this scenography we think more of Caspar David Friedrich’s alpine painting Wanderer above the Sea of Fog than the small but not unimportant Hessian town. Again, the director does nothing to animate this lifeless scene, even when the text speaks of “lots of people, still more people, they are coming from all sides.” One sees only a trickle of individuals coming from what one surmises to be the church. 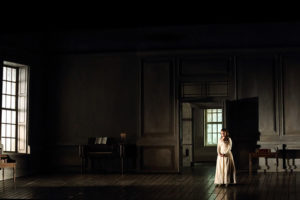 The third act is more creatively set in a rather typical upper bourgeois German living room. But again: zero action or activity. The last act in Werther’s study looks like a garret borrowed from La Bohème, and its main idea seems to be that the room gradually moves closer to the front of the stage. 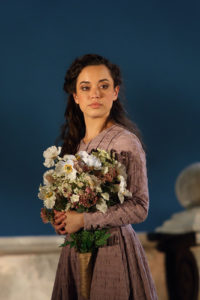 The real attraction of this outing of Werther was Peruvian superstar Juan Diego Flórez. There was a lot of curiosity to see how the most accomplished belcanto tenor of this generation would transition into more Romantic territory. His voice, a paragon of bel canto agility but also of astounding vocal discipline, does not prima facie lend itself to the sulking and suffering Sturm und Drang hero Werther. And yet, Flórez made a success of it. Not with the brooding lustre of a Jonas Kaufmann (nor with the volume), nor with the irresistible italianità of a Vittorio Grigòlo (who led the 2016 revival). Flórez brought a tortured, introverted and – yes – disciplined Werther. His voice never descends into pathos, sobs or cheap tricks. He just delivers a perfectly sung, heartfelt but not heart-wrenching Werther. For his show-stopping Pourquoi me réveiller he briefly brought down the house.

Charlotte, the object of Werther’s obsession, was competently sung by the young American mezzo-soprano Isabel Leonard, who gave her house debut in this role. She was credible, precise and attractive, and delivered some lovely moments, particularly in the splendid Claire de Lune duet. Yet there was very little visible chemistry between her and Flórez.

Her eager younger sister Sophie was sung with conviction and boundless enthusiasm by the American soprano Heather Engebretson. Albert, Charlotte’s fiancé and later – to Werther’s deadly chagrin – her husband, was portrayed by the standout South African baritone Jacques Imbrailo. 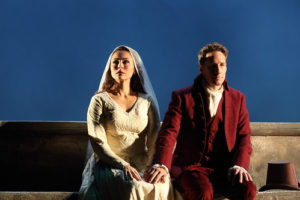 Isabel Leonard as Charlotte and Jacques Imbrailo as Albert in Werther, The Royal Opera © 2019 ROH. Photograph by Catherine Ashmore

The undisputed star of the show, however, was the Orchestra of the Royal Opera House which blasted through Massenet’s sumptuous score with more passion than we witnessed from the stage. Conductor Edward Gardner might have been well advised to hold back the fervour a little bit, as they regularly drowned out the singers.