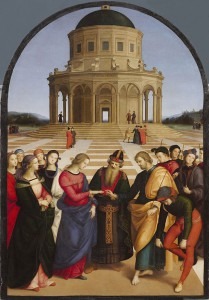 Raphael: The Marriage of the Virgin (Lo Sposalizio)

Italy has long been an influence on the development of music in Europe – perhaps it was due to the money inherent in its courts and the musical developments they supported, the promotion of art during the Renaissance, or just the inspiration of the warm south. Whatever the cause, when we look at Italy, we can see how much it influenced composers for centuries.

We’ll look at an important book in the history of the English madrigal, a tour of Italy taken by a famous pianist, and the inspiration from Florence in this overview of the Italian influence.

In 1588, there appeared in England a collection entitled Musica Transalpina (Music from Across the Alps). Published in London by Nicholas Yonge, Musica Transalpina can be said to be the true start of the English madrigal school. It took Italian madrigals by 18 different composers, with the majority by Alfonso Ferabosco and Luca Marenzio, and gave them English words, thereby bringing them into the understanding of the local performers. Ferrabosco was a familiar name to the English, as he had been at the court of Queen Elizabeth I from 1562 to 1578. 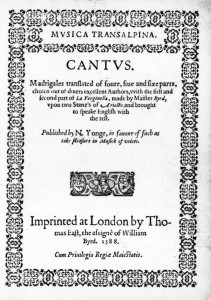 Now, jumping forward several hundred years, we have Franz Liszt doing his years of pilgrimage through Italy and Switzerland. Liszt was inspired by Italian art and literatura. In this collection we can see the influence of the medieval poet Pretrarch in the three Sonetti del Petrarca, the influence of Michelangelo in Il penseroso (after the celebrated statue of Lorenzo de Medici), Sposalizio (after Raphael’s painting, Lo sposalizio della vergine) and above all the last work of the collection, entitled Après une lecture du Dante and commonly known as the ‘Dante’ Sonata. It’s a collection that marks the degree to which Italy, no matter what century was the source, was still influential in the 19th century.

Liszt: Années de pèlerinage, deuxième année, Italie, II. Il penseroso (Jenő Jandó, piano)
Although Tchaikovsky entitled his String Sextet in D minor as “Souvenir de Florence,” it’s actually a curious mix of a light Italian beginning with a strong Russian ending. The composer, according to his brother Modest, created the first theme of the work in Florence, hence the title. We hear so many of the musical materials as reflecting the Russian imagination of Italy with its passion, beguiling flirtations, and, above all, its songfulness. When we look at the first movement, it captures so many of those elements.

Tchaikovsky: Souvenir de Florence, Op. 70: I. Allegro con spririto (Vienna String Sextet)
Compare that beginning with the start of the final movement, where we are clearly in the folk music of Russia and no longer in the sunny south. 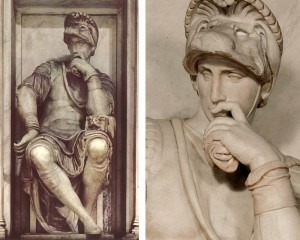 Tchaikovsky: Souvenir de Florence, Op. 70: IV. Allegro vivace (Vienna String Sextet)
For Nicolas Yonge and his Musica Transalpina, Italy was the source that had to be translated for the local market. Once the Italian madrigal became the English madrigal, it was something that the English could move forward and make into their own creation. For the Romantic side of Liszt, he saw the arts of Italy as an inspiration for some of his most important piano music. For Tchaikovsky, Italy was also an inspiration, but in a different way than Liszt found it. This isn’t the end of the Italian influence story, but merely a glimpse into the different ways Italy affected those who looked to her for inspiration.