Artists Interviews
Invented for a New Time: An Interview With Susannah Self
by Maureen Buja February 22nd, 2022 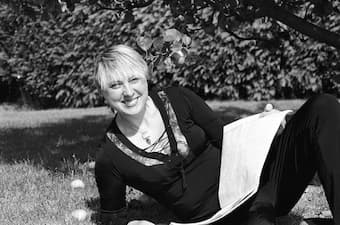 Composer Susannah Self started out as Mezzo-Soprano Susannah Self and also adds the title of Conductor Susannah Self to her honorifics. That’s not to say that all of these titles were sequential, but rather concurrent. As a student, she took both composition and voice classes, but was advised as she approached graduation that the opportunities for women composers were still so limited that she would be better advised to start her singing career. And, as a singing career has lots of waiting times, Self decided that she would start her first symphony.

As you look through her works list and recordings, you see so many of her interests come forward. Operas, for which as a performer she’s supremely qualified to write from the inside out, sound healing, for which her ambient music provides a space outside the daily rush, and her symphonic work. Which do more than just address a simple idea – they take on the world’s concerns and present them in musical form.

We spoke with Self to see how she viewed life as a composer.

Eight years ago, after two outstanding performances in operas in Lyon and Luxembourg, she decided to retire on a high note, as it were, and turn her career to composing full-time.

In her operas, she has sought to find subjects that allow for more layers of society to find a place in opera. Her 2018 opera Quilt Songs starts with the words of Abraham Lincoln, to the life of the bus protester Rosa Parks, and to the murdered Labour MP Jo Cox. Each of these different stories are juxtaposed like the fabric on a quilt, hence the title. The opera isn’t intended for a single audience but is written to appeal to an audience of today – broadly diverse with different musical heritages.

Her first opera, Heroic Women, ‘asks what it means to be truly heroic,’, both through characters such as Boudicca and Pope Joan, and through the ordinary women who serve them. It’s a one-woman opera that operates over a large historical scale, but makes it personal. The Boy from Brazil (2012) examines the life of a man who only wants to sing like Barbra Streisand and his life as a cross-dressing performer and prostitute. She takes unexpected topics and makes them thoughtful examinations of the world as we assume we know it.

One thing she’s supremely aware of is the financial problems of the modern arts companies. Several of her works are designed for solo mezzo plus ensemble (be it small or large) for which everything fits in 2 suitcases. As a composer, she feels that she needs to be able to create works that an arts group can put on without bankrupting everyone.

Two of her symphonies have been recorded by the Moravian Philharmonic and again, we see writing that’s outside the usual. Her first symphony is based on woodcuts by the 19th-century Japanese printmaker Hokusai; her second symphony, ‘Memory, Dreams, Reflections,’ uses the autobiography of psychiatrist and psychotherapist Carl Jung for its inspiration.

She spoke of the inspiration she received from John Cage when she met him at a conference in Banff, Canada. He spoke about the power of improvisation and she’s taken that as one of the important parts of her compositional process. It’s a starting point, not as a point of transcription, but as a point for an overview. It carries Cage’s idea of play forward. One writes, and un-writes, and tightens up but always with a sense of finding the path forward.

She also works in the field of sound healing, helping people to slow down their world and stop rushing. She has published CDs of her ambient music and also has set some in video landscapes.

These soundscapes also become part of her operas as large orchestral sections that still convey images.

New projects coming up involve a Sea Requiem that will reflect Norfolk and the North Sea around the area where she currently lives. Like Britten in his War Requiem, she’s using texts from outside the Requiem tradition, including Emily Dickinson’s poem Exultation and Walt Whitman’s poem Song of Myself where he addresses the sea. She’s also working on a piece for mezzo-soprano, women’s choir and string orchestra on the Black Death, as a way of dealing with the international COVID pandemic.

She’s a strong composer and each new work reveals a new facet to her skills. She’s writing music for a new audience and a new time – discover the extensive works of Susannah Self on her YouTube channel.