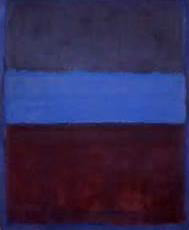 Many 20th century and contemporary artists claim not only to have been inspired by music, but make a very compelling case for a close connection between a particular kind of music and their art. 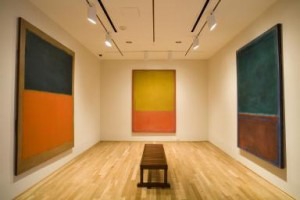 The Rothko Room at the Phillips Gallery, Washington D.C.

Mark Rothko (1903-1970) according to the recent biography, ‘Mark Rothko, From the Inside Out’, (by his son, Christopher Rothko, Yale University Press, 2015) can not only be considered a “philosopher who painted”, but a painter “who aspired to be a musician”(p. 169). Anyone who visited Rothko in his studio was immersed in the sound of opera in general, and the music of Wolfgang Amadeus Mozart in particular – “the alpha and omega for Rothko” (ibid,p.169). Rothko considered Mozart’s stylistic and formal principles a direct influence on his art. For Rothko, Mozart‘s transparency of textures gives way to greater expressivity, where themes and musical phrases sing in a very natural way. Rothko’s paintings without frame, simple pigments on canvas or paper, no varnish, no linear perspective, no title — hence no story — where the materials themselves are the story. His colors “are remarkably like Mozart’s melodies, put forth without decoration, at liberty to resonate within the sonata structure of the rectangular forms. The transparency that is the hallmark of Mozart’s compositional language permeates Rothko’s as well, the artist thinning his oils and temperas to allow the “inner voices” of his paintings to radiate through” (ibid p. 171). We are often struck by the simplicity of Rothko’s paintings, but they really do reveal much more complexity and depth when considered in detail and over time, in that his “color-field paintings are like a Mozart aria, where the purity of form and the harmonic landscape established by the sustaining strings frame a vocal line but also liberate it, making possible the most compassionate communication” (ibid, p. 173). 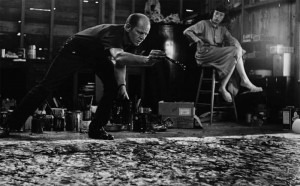 For Rothko, Mozart was “always smiling through tears” – tragedy, ecstasy and doom were not only the real subject of his paintings but present in Mozart’s music as well – as the Adagio of the Divertimento Trio, K. 563 or the first movement of the Piano Concerto No. 26, K 537 show (ibid. p. 171). Rothko was drawn to the music of the Classical period (Mozart, Beethoven, and the early Schubert), just as he was to classical architecture (Greek and Roman temples) reflected in the classical, simple, and elemental form of his paintings — expressing a harmony and balance – a visual chord where all of the elements work together. 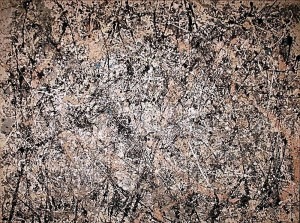 Jackson Pollock (1912-1956), Rothko’s contemporary, moved to a different master. As many writers have noted that there was an affinity between Pollock’s paintings and jazz. Lee Krasner, Pollock’s wife tells about his obsession, listening to his jazz records for days on end – “day and night for three days running until you thought you would climb the roof. The house would shake. Jazz? He thought it was the only other really creative thing happening in the country”. Pollock’s extensive record collection contained the greatest musicians of his time, Louis Armstrong, Count Basie, Billie Holiday, Duke Ellington, Fats Waller and many others. 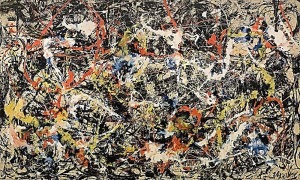 When contemplating his famous drip paintings, we can say that they reflect the rhythmic improvisation of jazz, structured, but with different instruments (colors) coming in as solos at different times. Pollock liked moving around his canvasses. Several films taken during his most creative period show him dripping, pouring, and throwing paint onto the canvas on the floor, moving like a dancer in controlled, elegant movements, where nothing was accidental — interlacing colors and lines which conveyed the dynamism and freedom the jazz age.

Pollock told an interviewer once that his paintings should be enjoyed just as music is enjoyed — leaving their interpretation open and — just as Rothko’s work — letting the paintings speak for themselves.