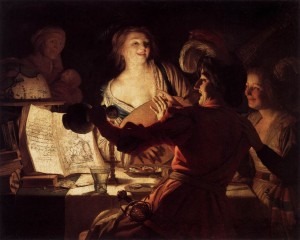 The Renaissance – the sixteenth century time of rebirth was also a time for musical games. One of the greatest games of the day was sex. Musical references to sex were everywhere and especially in the madrigal.
The madrigal was the secular song of the day – composers set both the poems of Petrarch and the poems of their friends. From Petrarch, the 15th-century poet, they took the idea of contrasting feelings: I freeze, I burn for you… They also took the idea of the poet/lover being forever thwarted in his love and dying alone. However, when you start to read the poetry a bit more closely, it’s not about dying in the permanent sense, but in a more sexual sense.

One of the most famous of these erotic deaths is that of the shepherd Tirsi. Tirsi morir volea | Gli occhi mirando di colei ch’adora (Tirsi wanted to die, gazing into the eyes of his beloved). His beloved says to him “…do not die yet, for I want to die with you.” They feel the messengers of love (a wonderful phrase) and die… a death so sweet and pleasant that, to die again, they returned to life.
Marenzio: Tirsi morir volea (Concerto Vocale; René Jacobs, cond.)
The poem by Giovanni Battista Guarini was one of the most popular of its day, primarily for its possibilities. It was set by Luca Marenzio in 1590, Giaches de Wert in 1581, Andrea Gabrieli in 1587, Luzzasco Luzzaschi in 1604, just to name a few composers who took up the poem. The poem was clearly circulating in manuscript because it didn’t actually appear in print until 1581.
The madrigalist Carlo Gesuldo upped the stakes by having his lover declare that he suffers because “Mille volte il dì moro” (A thousand times a day I die). He equates his deaths with the number of sighs he has from frustration each day but since he’s still complaining, we know he’s still alive. The dissonances in this piece are particularly poignant of his condition. 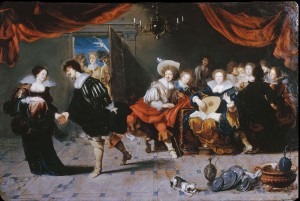 Gesualdo: Mille volte il dì moro (Delitiae Musicae; Marco Longhini, cond.)
Carlo Gesualdo was the Prince of Venosa and the Count of Conza, in southern Italy. He’s known just as much for his dissonant madrigals as for the fact that he murdered his wife and her lover when catching them in bed. He was not found guilty.
One of the most dramatic readings of the anguish of the unrequited lover occurs in Monteverdi’s 1632 setting of Ottavio Rinuccini’s poem ‘Zefiro torna e di soavi accenti.’ The poem begins with a wonderful description of the return of the West Wind (the Zephyr), which brings Spring. The rivers lose their ice, the fine weather comes, the shepherdesses dance, all observed by our poet / lover. Then he starts talking about himself (03:33): Sole io, per selve abbondante e sole…” (But I, in remote forests, am alone…). Monteverdi’s setting, for 2 matched voices, usually tenors, is a tour-de-force in vocal writing – the singers are up mountains, down valleys, imitating murmuring brooks, and dancing fields of flowers. Yet, when they get to their unhappiness, dissonance descends, and they are in torment, they weep, only regaining their happiness when they sing.

Love – unrequited or satisfied – was always of interest in the Renaissance and the torments or resolution was perfect for composers to set.