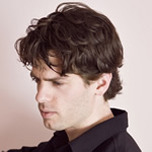 Bringing to the table a new composition entitled Duo: in cerca, American composer Eli Marshall is 90% excited and 10% nervous about the upcoming Intimacy of Creativity workshop, calling it not only a challenge to “think outside the box, but to go deeper into the box.”

“You’d like to think you know what to expect but there are always surprises,” said Eli, who is currently a visiting scholar and composer-in-residence at the Hong Kong University of Science and Technology.

“The collaborative nature is not just about making profound music, but about having the same attitude towards composing and performing,” he said, comparing the process to a ping pong match.

“We generate a lot of energy that way, I predict.”

Eli is a 10% nervous, but says that it is all part of the fun of doing music. He has given much thought choosing which of his compositions to submit, as well as drawn from his own experiences in music creation. For all his worries, Eli has done his homework. He knows what he’s in for.

Eli first came in contact with IC last year when he attended one of the world première concerts and watched his former mentor Joan Tower perform onstage.

“It was amazing to see Joan after so many years,” said Eli, adding that she only had good things to say about IC.

Joan Tower, a pianist and a composer, was a distinguished guest at IC 2012, and shared the same sentiments with IC founder Bright Sheng that many composers nowadays do not play anymore and performers don’t compose. The purpose of IC was to provide a platform for performers and composers to interact and connect with each other, an art that was prevalent in the past but lost in this generation.

For Eli, who has always wanted to be a composer and wrote his first composition when he was merely 8-years old, interacting with performers on such an intimate level was a rare opportunity.

“Only when I’m lucky,” he said of getting performers’ criticism. “When the performers know the piece well, when they are comfortable with mentioning what they think, and when there is time to talk about making changes.”

“And that’s the special thing about IC… I haven’t had that level of interaction before in such a formal capacity,” he said.

Veering away from traditional and accepted standards is always a risk, but Eli finds fun in being creative, and IC would not be his first taste in the unconventional. In 2006, he was invited to have his composition performed at the Gak-won Sa Buddhist temple in Korea, a project Eli says challenged him to think outside the box.

“I learned… to find new ways to express [myself],” he said. “…to think about presenting music to the person in the audience… placing them in a new venue, a new angle, and allowing them to experience something that was not regulated in concert rules.”

The IC workshop is “very much in the same spirit,” he added.

The composers are here to revise their works and debut the revised works, but “it’s not just about the superficial delivery or presentation,” said Eli. “What I look forward to is getting under the hood and understanding the mechanism of creating music.”

In other words, said Eli, to work not just “outside the box” but also “deeper into the box.”

Eli chose to showcase his new work, Duo: in cerca, at this year’s IC, saying that the piece, written for the violin and the viola in two sections, would “inevitably evoke dialogue in pairs.”

Performed with only two players, the work is undoubtedly very intimate, allowing for a lot of space for creativity and collaboration as the players interpret the two very different ideas in the piece. Eli describes the piece as a single movement that starts with something vocal and chant-like, and ends in a rhythmic, percussion sound.

“It’s about the tension between the two ideas. The voice and the drum, the lyricism and the rhythm,” he said.

Eli believes the piece is really suited to IC, and looks forward to how the piece would spark conversation between the players, Katie Hyun and Simone Gramaglia, both of whom Eli is excited about working with.

“I would be thrilled to make changes,” he said. “I want to see what the performers can do with it.”