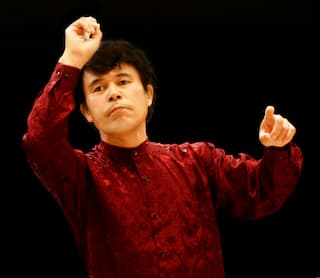 Throughout human consciousness, the great rivers of this world have spiritually highlighted the paradoxical relationship between eternity and change. As metaphors for life itself, they simultaneously underscore all that is timeless and ephemeral in human experience and existence. Because rivers and water sustain life by renewing the fertility of the land, poetry, folklore and music have long emphasized their purification and cleansing properties. Vested with enormous spiritual significance, rivers have given rise to temples, cities and civilizations, but they have also been used as material pathways for trade, the migration of people and ideas, and as natural or conceptual borders between countries. From crashing waves and serene river scenes to sublime lilies in a pond, artists have long focused their masterworks on water’s refreshing, purifying and revivifying essence. 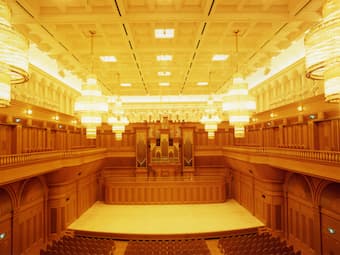 Award winning composer Hiro Fujikake based his “Aqua Rhythms” precisely on such contemplations of various forms of water, including spring water, a mountain stream, murmuring, a waterfall, and a river. There are numerous expressions about water in Japan, and the composer likes the saying “The flowing river never stops and yet the water never stays the same.” Hiro hails from Gifu prefecture, a region dominated by tall mountains in the north and the fertile Nōbi Plain in the south. Gifu is home to some of the most spectacular rivers in Japan, and also to Salamanca Hall. This dedicated concert hall was inaugurated in 1994, and it is the result of the cultural exchange between Gifu Prefecture and the City of Salamanca in Spain. The centerpiece of this exceptional concert hall is a full-size pipe organ sporting 3 manuals and 45 ranks.

The pipe organ in Salamanca Hall is a beautiful replica of the Renaissance-style organ housed in the New Cathedral of Salamanca. That organ was originally constructed in 1558, but over time the pipes and keys deteriorated and the instrument became unplayable. However, Hiroshi Tsuji, an organ builder based in Shirakawa town, Gifu Prefecture, expertly restored this delightful instrument to new glory. He also built the instrument in Salamanca Hall, ingeniously combining a northern Germany Baroque style with Spanish features. Having created this magnificent pipe organ Hiroshi Tsuji was eager for a composer from Gifu prefecture to explore the possibilities of the instrument. Under Mr. Tsuji’s guidance, Hiro Fujikake listened to the sounds of the instrument for many hours, and he started to formulate his musical thought. 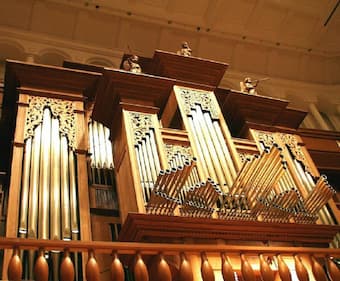 Organ in the Salamanca Hall

“Aqua Rhythms” was completed in 1998, but since Mr. Tsuji had sadly passed away, the existence of this music was unknown for over 13 years. Hiro was eager to have his piece performed, and he initially arranged the work for mandolin orchestra. A chamber version was performed in Tokyo, and the original version of string ensemble and organ premiered in January 2011. Cast in two movements, we are immediately immersed in a lush wash of musical sounds. Like a broadly flowing river, the music undulates over a basic ostinato progression. This base harmonic progression also forms the foundation of a short organ cadenza and the subsequent fugal exposition with renewed rhythmic animation. A number of fortissimo statements forcefully lead the “Allegro” movement into a quiet and introspective coda. The soulful “Adagio” is cast in a Theme and Variation movement, and once again relies on a rudimentary harmonic progression. This movement also provides the opportunity to showcase the “Nightingale” rank; an unpitched stops with the pipe submerged in a small pool of water. The resulting sound imitates the warbling of a bird. “Aqua Rhythms” is a charming and melodies piece in the category easy listening. And while the ostinato techniques, and various contrapuntal insertions are handled with competent skill, the process unfolds without any real sense of musical imagination. As such, we are always painfully reminded of the repetitive nature of such structures, and the title reference to the rhythm of water does not actually provide relief. The full possibilities of this marvelous hall and its magnificent pipe organ wait to be fully explored.