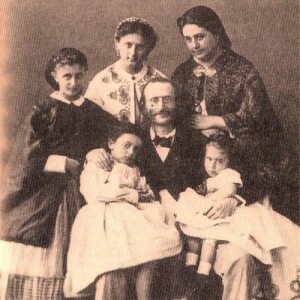 After Jacques Offenbach abruptly discontinued his studies at the Paris Conservatoire he gradually built a reputation composing for and performing in the fashionable salons of Paris. And at one of these cultured gatherings, his eyes fell upon a young Spanish woman by the name of Marie Manuela Hérminie d’Alcain. She was the daughter of the Carlist General José Maria Xavier d’Alcain Garro, who had been forced into French exile. The General died in 1828, and his wife Jeanne-Marie Céleste d’Alcain remarried Michael George Mitchell in 1835. Hérminie was barely 15 years of age but Jacques was determined to marry her. He dedicated a waltz to her in 1841, and a Romanze in 1843 as well. However, her family was not convinced that the young cellist was in any financial position to proposed marriage. As such, Michael George Mitchell arranged for a tour to England. 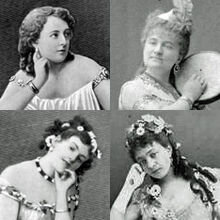 Offenbach later reports to his librettist Emile Chevalet, “As you can imagine, music was played after dinner. I played my Musette, and the audience hammered on the table for at least five minutes and screamed “da capo,” so I was forced to repeat the piece.” A critic wrote, “Offenbach’s execution and taste excited both wonder and pleasure, the genius he exhibited amounting to absolute inspiration.” The highlight of the England tour was undoubtedly an invitation from Queen Victoria to perform at Windsor on 6 June 1844. The Illustrated London News reported, “Herr Jacques Offenbach, the astonishing violoncellist, performed on Thursday evening at Windsor before the Emperor of Russia, the King of Saxony, Queen Victoria, and Prince Albert with great success.” Offenbach’s tour of England was a rousing professional and financial success. He returned to Paris full of confidence and in anticipation of his marriage to Hérminie, but there was a further obstacle. Her family demanded that Jacques convert to Roman Catholicism. 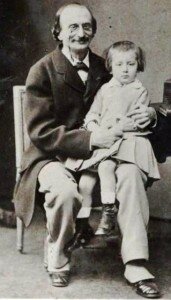 Offenbach and his son Auguste

And so it came to pass that Jacques Offenbach was baptized on 8 August 1844 in the church of Notre-Dame-de-Bonne-Nouvelle. Comtesse Madeleine-Sophie Bertin de Vaux and Edme Ernest Foucher acted as sponsors, and only a couple of days later the couple wed at Saint-Roch on 14 August 1844. The blushing bride was 17 years old, and the bridegroom was 25. The newlywed couple quickly establish themselves in the social and artistic scene, and Hérminie becomes the catalyst for Jacques’ success. A friend reports, “Jacques was highly confident in musical matters, but he always listened to his wife’s advice. Not a single page of music was delivered which he had not played to her first. And although he defended himself in the rare cases that she declared something unworthy of him, the next day a new version was composed and presented to Madame Offenbach for inspection.” 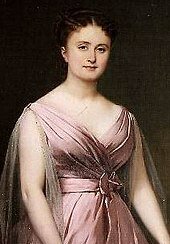 The union produced four daughters and a son Charles Ignace Auguste, who followed in his father’s compositional footsteps. Sadly, Auguste died of tuberculosis at the age of 21. The Offenbach household quickly becomes an important musical and intellectual center in Paris, and their “Friday Evenings” attract the composers Georges Bizet and Léo Delibes, the painters Edouard Detaille and Gustave Doré, the librettists Hector Crémieux and Ludovic Halévy and the journalist Hippolyte de Villemessant. During summer holiday, the Offenbach salon annually moves to the “Villa Orphée” on the Normandy Coast. Throughout his life, Jacques continued his busy professional traveling schedule, and his favorite female interpreters often accompany him. It is claimed that he never had an affair with his favorite singer Hortense Schneider, but we do know that he had a dalliance with the 20-year old Zulma Bouffar, a relationship that produced 2 children. Nevertheless, his 36-year marriage to Hérminie was essentially happy, and after his death a friend reported that Hérminie “gave him courage, shared his ordeals and comforted him always with tenderness and devotion.”