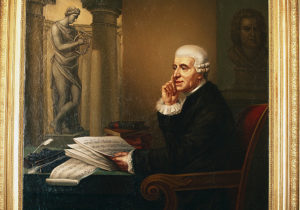 Joseph Haydn paid two extended visits to the city of London, in 1791-2 and again in 1794-5. As one of Europe’s most famous composers and musicians he enjoyed an exceedingly warm reception. The music historian and critic Charles Burney recalls in 1791, “This year was auspiciously begun, in the musical world, by the arrival in London of the illustrious Joseph Haydn… and on February 25, the first of Haydn’s incomparable symphonies, which was composed for the concerts of Salomon, was performed. Haydn himself presided at the pianoforte: and the sight of that renowned composer so electrified the audience, as to excite an attention and pleasure superior to any that had ever, to my knowledge, been caused by instrumental music in England. All the slow movements were encored; which never before happened, I believe, in any country.” Haydn also contributed to over twenty morning chamber music concerts at the Prince of Wales’ residence, and he was encouraged to settle in England, just as Handel had done before him. 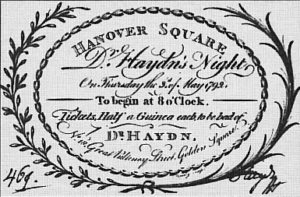 Haydn was wined and dined in the most illustrious London residences, and he was in high demand as a teacher. One day a nobleman called on him to give him a few lessons in composition. Haydn had no objections, and the visitor opened the score to one of Haydn’s string quartets. He wanted to know the reasons for some unusual modulations and exotic harmonic progressions, and they started to examine the music. The willing student pointed to some passages but Haydn could only say that he wrote it to obtain a good effect. The eager student was not satisfied with Haydn’s explanation, and demanded a better explanation. So Haydn suggested that the student rewrite the music after his own taste, but he declined. Nevertheless he kept asking Haydn, “How can your way, which is contrary to all rule, be the best.” Finally, Haydn lost his patience and told the eager student, “I see, my lord that it is you who are so good as to give lessons to me. I do not want your lessons, for I feel that I do not merit the honor of having such a master teacher.” And with that, he shoved the annoying student out the door.