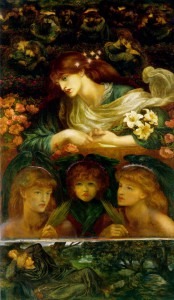 The Pre-Raphaelites as a group were founded in 1848 and quickly became a 7-man brotherhood. The group was started by William Holman Hunt, John Everett Millais, and Dante Gabriel Rossetti who were then joined by William Michael Rossetti, James Collinson, Frederic George Stephens, and Thomas Woolner. Rejecting Mannerist art because it seemed mechanistic, they looked back to Raphael and Michelangelo for inspiration.

Dante Gabriel Rossetti’s 1871 painting, The Blessed Damozel, is based on his own 1850 poem of the same title. The text was revised twice and published in 1856, 1870, and 1873. The poem depicts the departed maiden observing her lover from heaven and her yearning for their reunion.
The painting has the first 4 stanzas of the poems written around the edge.
The blessed damozel leaned out
From the gold bar of Heaven;
Her eyes were deeper than the depth
Of waters stilled at even;
She had three lilies in her hand,
And the stars in her hair were seven.
Several pieces of music were based on the poem, including as a work for voice and orchestra by Granville Bantock (1892), and as a song for piano by Arnold Bax (1906)). We will be looking at two other works, Debussy’s La demoiselle élue from 1888 and William Alwyn’s Autumn Legend (1955).
In 1885, Debussy went to Rome as the winner of the Prix de Rome, the most important competition for students at the Paris Conservatoire. Winning the Prix de Rome was viewed as the crowning achievement of their studies. As part of their award, the winners had to send back 4 works, one a year, to show their achievement. La demoiselle élue was Debussy’s third work. The title comes from the French translation of Rossetti’s poem “La Damoiselle élue s’appuyait sur la barrière d’or du ciel” (The chosen girl lean’d out from the golden bar of heaven).
This work has been described as “a small oratorio touched by mysticism and a little by the pagan spirit” and has been also called “symphonic stained-glass window by Fra Angelico Debussy”.
Debussy: La demoiselle élue (Paula Rasmussen, mezzo-soprano; Dawn Upshaw, soprano; Los Angeles Master Chorale, Women; Los Angeles Philharmonic Orchestra; Esa-Pekka Salonen, Conductor)
English composer William Alwyn created his Autumn Legend in 1955 with a haunting and atmospheric feeling similar to that in Debussy’s oratorio. Although this work doesn’t set the text, Alwyn wrote the some of the lines from the poem as the preface to his work.
Alwyn: Autumn Legend (Rachel Pankhurst, cor anglais; Royal Liverpool Philharmonic Orchestra; David Lloyd-Jones, Conductor)
Surely she leaned o’er me – her hair
Fell all about my face…
Nothing: the Autumn fall of leaves.
The whole year sets apace.
Alwyn collected a number of Pre-Raphaelite paintings in the 1950s and they hung on his studio walls as inspiration at this time. There’s so much about the work that sounds as though the English horn were just improvising on the spot and that goes so far in creating the mystical world of Rossetti and his yearning blessed damozel.