Events Reviews
The Gospel According to the Other Mary
English National Opera
by Oliver Pashley December 24th, 2014 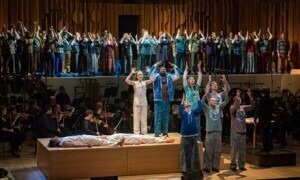 We’re blasted with the full force of the chorus right from the beginning of the show, accompanying a brutal prison drug search. This was one of many lights in which we saw the English National Opera chorus during ENO’s production of John Adams’ The Gospel According to the Other Mary, a world stage premiere taking place in the grandiose London Coliseum.

No sooner were the chorus’ chants of doom ringing in our ears when the pacing shifted, a soliloquy moment for Patricia Bardon, playing the role of Mary Magdalene. The chorus, no longer in full view, but rather disguised from a distance behind a screen, gave an effective change of pace: one moment intoning ‘the day of the Lord is at hand’, all guns blazing, the next chanting poems of Rosario Castellanos, as distant voices from another world.

At times the ‘story’ was hard to trace – but perhaps we were expecting the wrong thing. The piece is described as a ‘Passion Oratorio’, not an opera. There were many moments of dramatic contemplation, some with an effective tension, others more suspended, the variation of narrative reflecting the diversity of director Peter Sellars’ libretto.

As with another Sellars/Adams collaboration, Doctor Atomic, the libretto is drawn from a gamut of origins, poetry by contemporary Louise Erdrich rubbing shoulders with passages from the Old and New Testament, and everything in between (Medieval composer Hildegard von Bingen also makes an appearance). 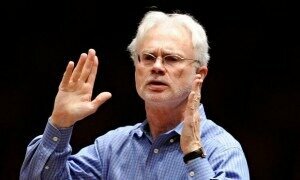 The biblical passages certainly had that awe-inspiring, imposing terror, the majestic, benevolent yet volatile. This was in no small part due to Adams’ incredibly evocative score. In typical Adamsian fashion, his orchestra is augmented with a battery of exotic percussion, including a cymbalom, its power to subtly yet massively shift the mood testament to its successful integration into the ensemble. Indeed, it is Adams’ music that steals the show, creating a cohesive tapestry of the libretto’s many-coloured strands.

The ENO Orchestra became a voice that contributed to the drama, rather then simply accompanying the singers, shifting between violent outbursts, driving (and what sounded like incredibly complex) rhythmic motifs, and atmospheric scene-painting.

Working with the orchestra was a cast of six, the pure sound of the countertenor Seraphim trio (Daniel Bubeck, Brian Cummings, and Nathan Medley) ethereally contrasting with the bright directness of Patricia Bardon, the sheer power of Russell Thomas, and Meredith Arwady’s incredibly rich contralto.

The dancing was equally unforgettable, the dancers constantly shadowing their vocal counterparts, sometimes commenting, sometimes narrating. The fluidity and prowess of street dancer Banks drew more than a couple of gasps of amazement from the crowd who were seemingly caught unaware by the juxtaposition of two apparently disparate art forms.

The mood of The Gospel According to the Other Mary is more reflective than directed. The directness with which Adams’ score hits you vividly depicts each moment as it occurs, and so embracing the abstract and observing, rather than following, the events as they unfold make for a unique evening, Adams proving himself once again as a master of the orchestra.

John Adams, The Gospel according to the Other Mary (2012)