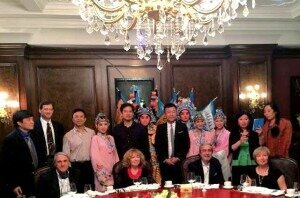 How and why is the city of Xian 15 million strong and host of the “Silk Road Festival“ so immaculate?

The answer is an army of street sweepers working nonstop, 24 hours. It all starts in the morning with the cleaning of sidewalks by an army of middle aged men clad in orange stripped jacket, armed with olden type dried branches advancing in a tedious slow march and emptying the refuse in corner street bins.

This is followed by a senior expedition of cleaners much resembling the earlier ones, but in charge of doing the corners. Finally, in the late afternoon the last contingent arrives holding large brooms of wood, capped by swaths of nylon the width encompassing the side-walk. This process finished, they cull the whole refuse with barren hands, emptying it in large containers.

Now the side-walk is spic-span clean, you could actually picnic there.

A city proud to display the 10,000 army Terracotta soldiers discovered by haphazard in 1974 by local peasants.

Army built, the story goes, by the paranoiac first Chinese emperor Qin Shi Huang in the third century B.C.E, all this to guard him in the afterlife.

The festival involves the city, the University, the Conservatory, piano shops, restaurants, hotels and everything else needed to run a festival.

Two entrepreneur musicians, piano professors of Chinese origin, one from Austen, Ming Ge and one from Paris, Jia (Helen) Chong have sourced and put together over two years this novel festival, which is an extraordinary feast, given the large number of local people, visitors, student events and general public involved.

There is a steady photographer and multiple amateur picture takers, sometimes as young as four years old, still sitting in their mothers’lap.

Multiple halls ranging from modest size, 300 seats to huge, 4000 seats. Always full, always young people. The average age of the public must have been 20 to 25 and ranged from 4 years old, alert and interested to 40 years old, still alert and still interested. The only white haired people were the jury . 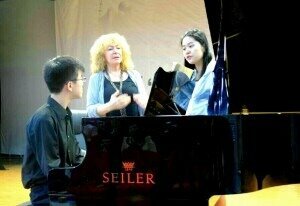 Interminable distances between the music / audition halls, the hotel and the restaurants made us (jury and companions) feel at the end of the day as if we have crisscrossed California or the north of France.

A large, friendly welcoming staff, a pretty door woman dressed in full regalia giving me the military salute making me feel like a general.

Breakfast is a staggering display of foods; there is a western section; Cornflakes of five varieties, bad coffee, moult teas of course, multiple juices, eggs in all possible fashions, cold cuts, cheeses and I forget.

Then the oriental display with steamed vegetables, congee, noodles, Peking ducks, Dim Sum and pork dishes in the early morning!!

And now the music competition; Management has accepted 200 students, a young, middle age and adult group.

They hail from the local conservatory, the numerous music sections of the universities and the innumerable private studios, hundreds in this town and this explains partially how come that 40 million Chinese are busily playing the piano every day for 360 days of the year.

The weeding week long process of the students will leave only 8 finalists on the last day, which like most of the day before fill play for a sold out hall.

In the middle of Ilana Vered’s masterclass a youngster Yang He-Chao, 8 years old jumps uninvited on the stage: He throws himself on the piano and devours a Chopin etude, great fingers, great spirit, good musicianship.

It is decided on the spot that he will come to Perugia to our festival.

In China lot of things happen ad hoc: Ilana Vered played yesterday a recital in a 4000 seat auditorium. The auditorium was full to the brim.

This is the Chinese miracle and it is not only in the numbers: It is in the public; more than half of the audience is young, very young. From four years old on… and they listen, some seated on the laps of the parents, attentive, riveted.

Little bodies clued against the rails of the balcony, not moving, lasering on the piano and Ilana.

I think soloists in China sense this devotion, passion, curiosity for these ancient scrolls composed by European geniuses 300 years ago. Who can explain this?

The first composition was of an important modern Chinese composer, Liu Zheng, followed by the Poulenc concerto for two pianos, the combined talent of these two veteran pianists was displayed with bravura, great technic, imagination and panache.

The Youth Orchestra of the Conservatory accompanied courageously these great compositions.

The next concert, Peter Roesel from Dresden successfully played his compatriots: Beethoven, Schubert and Schumann.

You knew that he grew up with the sound of this music. An understated, judicious virtuoso when needed. The full hall only lets him go after two encores.

George Pludermacher of German origin, but a professor at the Conservatoire National in Paris served a full plate of French music; Ravel, Debussy and a masterful transcription of Stravinsky’s Rite of Spring.

The raucous hall of young people responded in tune to this masterful modern musical adventure that Pludermacher himself wrote.

Where do you see night after night large halls filled to brim with enthusiastic youngsters (I mean young, age 5 – 20) staying through enthusiastically in a piano recital.

Ilana Vered’s recital was moved to a larger venue.

In what country do you fill a recital hall of 4000 seats except for Lang Lang?

The hall was full, young, enthusiastic, they listened to: Bach, Haydn, Mozart, Chopin and were asking for more but after two encores the lights were hashed.

Now the Silk Road Festival moved to the semi-final stages. Youngsters from the Xian Colleges, University and Conservatory classes were competing in the final stages.

There is an abundance of talent of China as nowhere else on the planet and for a cause: the numbers of pianist sitting and practicing the piano daily are staggering. Some say 40 million. Gary Graffman told me, 50 million.

And more recently Hung Kuan Chen told me “there must be about one million (!!) piano teachers in China teaching in little private piano studios.

Imagine one million pianos, pianists and professors: a musical planet!

There are hundreds of small piano schools in Xian, attended by pre- or elementary school children.

The semi-finals and finals brought for a dozen of outstanding pianists. Some of them will go on to become important pianists in China and may be in the world.

This short narrative of the Silk Road Festival would not be complete without mentioning the numerous banquets the judges were invited to.

Enchanting “lazy-Susan” were rolling around teak-mahogany tables in our private dining room in a non-ending dance carrying the most exotic dishes during our nightly banquets.

Fluffy almond cake desserts and wait, a last serving of noodle soup to finish off the assembly.

This is accompanied by the wonderful habit of the host going around the table and personally toasting and greeting with each guest.

The Silk Road Festival lasted 10 days and for a first attempt it was a great success: Thousands of spectators hundreds of eager and talented students.

More than anything else Ming Ge and Jia (Helen) Chong have brought for the extraordinary interest, enthusiasm of the younger Chinese generation. The future of classical music is assured and Xian is to be congratulated for serving as an admirable host.