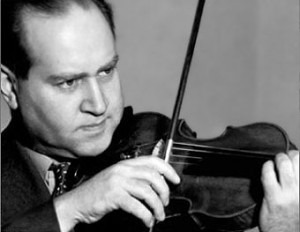 Milstein and Heifetz are but two violinists comprising the golden age of violinists. A discussion would not be complete without including David Oistrakh, Fritz Kreisler, Yehudi Menuhin and Isaac Stern.

Heifetz and his teacher Leopold Auer were viewed as traitors by their home country for immigrating to the United States. David Oistrakh, on the other hand, who stayed in the Soviet Union, was seen as a patriot. Born in 1908, Oistrakh played with virtually every major orchestra in Europe, in Russia and in the U.S. Numerous works are dedicated to him including the two Shostakovich concertos, the Khachaturian concerto and he premiered Prokofiev’s two violin sonatas.

When the Nazi army invaded the Soviet Union during World War II, Oistrakh traveled to the front lines. Oistrakh courageously performed the Tchaikovsky Violin Concerto during the battle of Stalingrad in 1942 while the city was brutally bombed.

Oistrakh’s rich tone is memorable to anyone who was lucky enough to hear him live as I was. 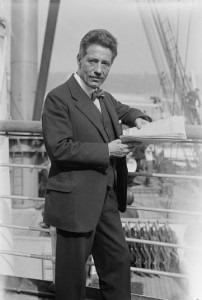 Austrian violinist and composer Fritz Kreisler was born in 1875. He studied in Vienna and Paris and had the benefit of illustrious teachers such as composers Anton Bruckner, Léo Delibes, and Jules Massenet. After his American debut in New York in 1888, he made an unsuccessful bid for a seat in the Vienna Philharmonic. Overcome by disappointment, he decided to abandon his career in music to try his hand at medicine. Lucky for us, Kreisler returned to the violin in 1899, performing with the Berlin Philharmonic. His U.S. tours of 1901-1903 finally lead to acclaim as a virtuoso soloist. Sir Edward Elgar’s Violin Concerto was commissioned and premiered by Kreisler.

Two calamitous accidents change Kreisler’s life after he emigrated to the U.S. In 1941 a truck struck him as he was crossing a street in New York. He was in a coma for days with a fractured skull. Sadly, he had a second accident towards the end of his life, which rendered him blind and deaf. Nonetheless it is said that he “radiated a gentleness and refinement not unlike his music.”

Kreisler’s beautiful pieces for the violin such as the Liebesleid and Liebesfreud are often performed as encores. He wrote operettas, a string quartet and several cadenzas for the major violin concertos including for the Beethoven Concerto, which are the ones that are performed today.

Kreisler’s trademark was his expressive phrasing and shimmering vibrato. His melodic approach included the liberal use of rubato (rhythmic flexibility) and portamento (slides) certainly an intimate, emotional approach loved by audience members. 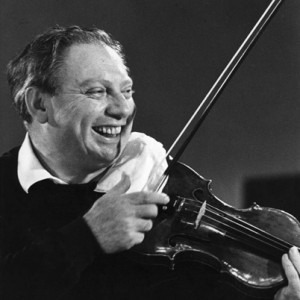 Stern’s discography defies description. In addition to performing all the violin literature, he was a very active chamber musician. His trio with Eugene Istomin and Leonard Rose won several Grammy Awards and later he garnered Grammy awards for his recordings of piano quartets with Emanuel Ax, Jamie Laredo and Yo Yo Ma.

In 1979 The People’s Republic of China offered Stern and pianist David Golub an invitation to tour China. The visit resulted in the Oscar winning documentary From Mao to Mozart: Isaac Stern in China. He was awarded the Grammy Lifetime Achievement Award in 1987. Stern is admired for his efforts to mentor younger musicians including Yo Yo Ma, Jian Wang, Itzhak Perman and Pinchas Zuckerman. He is also credited with saving Carnegie Hall in New York from demolition. 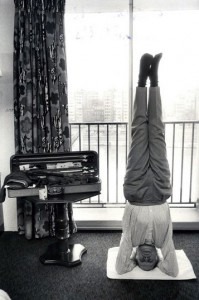 Yehudi Menuhin was born to a distinguished family. Yehudi’s father, writer Moshe Menuhin was descended from a distinguished rabbinical dynasty; his sister Hephzibah was a fine concert pianist and human rights advocate and his sister Yaltah was a painter, poet and a pianist. Menuhin began the violin at the age of four and exemplified extraordinary talent. His career catapulted after performing in Berlin in 1922 under the baton of Bruno Walter. Menuhin spent most of his career in the United Kingdom.

Menuhin performed for Allied soldiers during World War II accompanied by the English composter Benjamin Britten. He also played at the concentration camp Bergen-Belsen after its liberation. He was the first Jewish musician to perform in Germany after the war as a symbolic act of reconciliation — to attempt to restore humanity’s broken spirits. 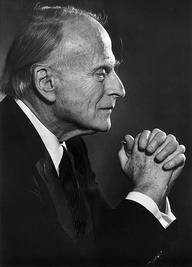 Menuhin traveled widely, devoting himself to global and humanitarian causes. Unfortunately, Menuhin’s unstructured early training due to his prodigious talents resulted in aches and pains that many of us suffer today. In 1951 while waiting for at an appointment with his osteopath, Menuhin noticed a small book on yoga. It piqued his interest. Fortuitously, in 1952, the first Prime Minister of India, Nehru, invited Menuhin to India for several fund- raising concerts. Menuhin mentioned the yoga book to Nehru who immediately challenged Menuhin to stand on his head. Much to everyone’s surprise Menuhin succeeded. Nehru then showed off his headstand. These lighthearted exchanges made International headlines. Every yoga teacher wanted to mentor Menuhin! B.K.S. Iyengar, the well-known yogi, was introduced to and befriended by Menuhin and their association lasted throughout Menuhin’s life. His physical discomforts disappeared.

Menuhin became a devoted disciple of yoga. In 1982, while conducting the Berlin Philharmonic in Beethoven’s Fifth Symphony, Menuhin stood on his head and conducted with his feet!

He said that “yoga made its contribution to my quest to understand consciously the mechanics of violin playing”, calling Iyengar “my best violin teacher”. At Menuhin’s invitation Iyengar came to Europe to teach some of the most famous artists and musicians in the world.

Perhaps the first internationally renowned musician to collaborate with world music artists, Menuhin had a long association with sitar player Ravi Shankar. Their first collaboration was the 1966 album West Meets East. Menuhin commissioned a concerto for violin, sitar and orchestra from the composer Alan Hovhaness entitled Shambala. The violin part is completely written down but allows the sitar player some latitude to improvise. Menuhin also performed frequently with jazz violinist Stéphane Grappelli. They can be heard together on the album Jalousie.

Menuhin has the distinction of having the longest recording contract in history — 70 years with EMI. He made his first recording at age 13 in 1929, and his last in 1999, when he was nearly 83 years old, recording over 300 works both as a violinist and as a conductor.

Although there were other fine violinists at the time, these six violinists truly changed the world of string playing. We are blessed that they commissioned the finest composers to write for them and their recordings remain for us to enjoy today.