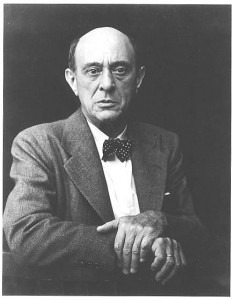 The French cabaret, around the turn of the 20th century, was much more then a simple place for drinking, dancing and entertainment. It was a gathering place for the artistic and literary elite that also served to project social and artistic ideals. The “Chat Noir” became the prototype of the French cabaret and was widely imitated through new establishments and touring performers. Among the traveling stars of these ambitious small literary theatres was the diseuse Yvette Guilbert, immortalized on canvas by Toulouse-Lautrec and Kokoschka, whose performances away from Paris found an especially attentive audience in German speaking countries.

In 1901, the writer Baron Ernst von Wolzogen — later the librettist of Richard Strauss’s opera Feuersnot — set out to create a cabaret tradition in Berlin. He was not merely looking to emulate the French tradition, but to surpass it intellectually. To that end, he formed a company to showcase sophisticated light entertainment created by adventurous poets and composers. The “Überbrettl Company” named after a Nietzschean pun on the word “Brettl” — a slang term for the little wooden boards of the stage — was modeled on the literary cabaret then popular in France. Established as part of the “Buntes Theater “ (Motley Theater) the company designed and build its own performance hall in Art Nouveau style. Seriousness of purpose claimed priority alongside hearty entertainment values, and the “Überbrettl” secured the services of Arnold Schoenberg, who had left a dull but secure bank job to pursue his musical dreams. Schoenberg quickly set to work and scored his Brettl-Lieder, eight poems from a collection entitled Deutsche Chansons, published in 1900 by Otto Julius Bierbaum. 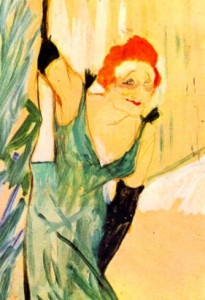 Bierbaums’ preface explains, “We are seriously convinced the time has come for the whole of life to be permeated by art. We want to write poetry that is not merely read in lonely rooms but that can be sung to a public hungry for entertainment.” These aspirations towards high standards was evident in cabarets like the “Überbrettl,” yet there was also laughter, and the genre relied on the closeness of performers and the audience. This familiarity informs Bierbaum’s “Gigerlette” poem, which describes in slightly veiled and suggestive metaphors a male visitor entering Miss Gigerlette’s flat. Also included in Bierbaum’s collection was a text by Frank Wedekind. During Wedekind’s lifetime his plays and poems were considered pure pornography, for he dared to deal with issues of sexual freedom and release, problems of puberty, moments of ecstasy between the sexes, and moments of misunderstanding and violence. His “Galathea,” set by Schoenberg may be considered representative: “Ah, I’m burning with desire/ Galathea, lovely child/Just to kiss your cheeks of fire,/ for they’re so alluring, wild.” After several stanza devoted to kissing cheeks, hands, knees and feet, the moral is revealed in the final stanza: “But to my kisses, darling maiden/Revealed your lips should never be/For the fullness of their charms, are only found in fantasy.” 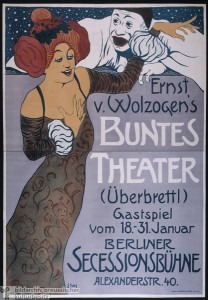 The poem “The Contented Lover” by the leading representative of the Prague literary scene Hugo Salus, was subjected to the strictest censorship because it eagerly explored the sexually suggestive nature of the cabaret. Schoenberg’s setting of Gustav Falke’s “Night Wanderer” was only performed once at the “Überbrettl,” because it called for piccolo, snare drum and trumpet to complement the piano accompaniment. A late-night celebration stands at the center of the poem, as musicians lead a group of extremely joyous partygoers through moonlit streets, inviting the whole world to join the fun. The celebration becomes hushed only momentarily, when they pass by the house of Henrietta, the ringleader’s wife. Their playful, mock and unstable marching is brilliantly captured by Schoenberg’s miniature military ensemble.Schoenberg also sets a poem by Emanuel Schikaneder, whose fame rests on commissioning musical settings of his own texts, the most famous being Mozart’s setting of his “Magic Flute.” Other Singspiel or opera texts include “The Labyrinth” the sequel to the magic flute set by Winter, “The Devil Mountain” set by Wölfl and the “Mirror of Arcadia,” set to music by Xaver Süssmayer. Schoenberg selected an aria from the “Mirror of Arcadia,” whose promiscuous and seductive text could easily transfer to a lilting waltz in a cabaret setting. “Since I’ve seen so many women my heart beats so warmly within me, it buzzes and hums here and there like a swarm of bees. And if their fire matches mine, their eyes lovely and clear, then my little heart keeps beating like a hammer — boom, boom, boom!” Schoenberg’s musical settings betray not only a highly experienced ear, but also identify him as a knowledgeable connoisseur of the genre. Sadly, the “Überbrettl” ceased operations after merely 6 months, and Schoenberg was once again without a job.