Composers Inspiration
The Goblin of the Night
by Maureen Buja May 17th, 2017 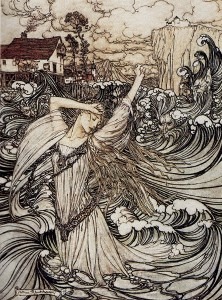 Maurice Ravel’s piano piece, Gaspard de la Nuit (1908), hides in its deceptively childlike title a radical piano work of great imagination. The pianist Alfred Cortot called it “one of the most astonishing examples of instrumental ingenuity ever contrived.

The piece is built around 3 stories from the posthumous work of Aloysuis Bertrand (1807-1841). He is credited as the inventor of the prose poem and an early Symbolist poet. After a career as a soldier, he settled in Dijon where he began writing for the local paper – his writings were recognized by authors such as Victor Hugo and he went to Paris before he died of tuberculosis. The collection Gaspard de la nuit was found in his papers by Charles Baudelaire and Stéphane Mallarmé. Three poems from the collection, “Ondine,” “Le Gibet,” and “Scarbo” were used by Ravel as his inspiration for this piano work. 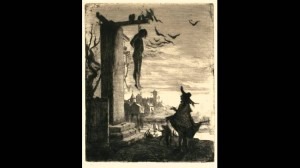 The first work, “Ondine,” the poet is brought to his window by the mermaid brushing water across his window. Just like Schubert’s Erkönig, she entices the poet to come to her realm where her father and sisters will welcome him. He should become her bridegroom and descend with her to be Kind of the Lakes. The poet replies that he loves a mortal and so she leaves, seeking another victim/spouse.

Ravel: Gaspard de la nuit: I. Ondine (Kumi Matsuo, piano)
The piece is built on rustling arpeggios and it is up to the pianist to create the story line out of the flowing waves of music. As a virtuosic piece, it summons up audio images of comparable works by Liszt, while at the same time is creating an impressionist work that looks forward to Debussy’s music.

The second movement, “Le gibet,” [The Gallows] evokes a crepuscular scene around a gallows – the poet can’t tell if he’s hearing lovers’ kisses or the hanged man’s sighs; is it a cricket or a bumping fly; is it a squirrel or a spider making a new tie for the dead man. The poet finally decides that he’s hearing the city bells at a distance, while the failing sun turns the hanged man a sunset red. 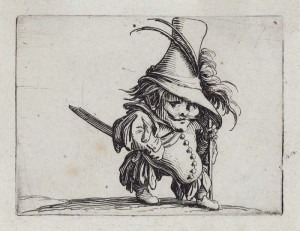 The slow movement is constantly filled with the tolling of the invisible bell of the distant city and that, combined with the tempo and the low dynamics, give us a spooky picture from the edge of civilization. Ravel forces us to see every detail of the image, despite the repetition of the bell.

The last movement, “Scarbo,” is about a cunning and devilish gnome who appears and vanishes at will.

III. Scarbo (Samson François, piano)
This movement is even more energetic and virtuosic than the first movement, as the gnome jumps and slips around the room. The poet describes as he hears Scarbo scratching at the bed, his laugh in the shadows, his leap from the ceiling to spin around on the floor – and then, just as the poet thought he was alone, up would rise Scarbo again, only to turn translucent and vanish.