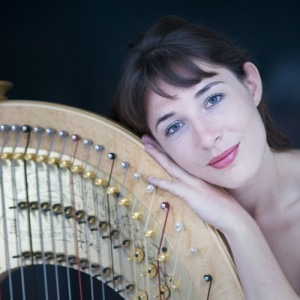 French harpist Anaïs Gaudemard started to play at age 8. Actually, she started on the piano but shortly after starting on keyboards, she met a harp teacher and started to study both instruments. By age 21, she had been awarded first place at The International Harp Contest in Israel. In addition, she also took a prize for the Best Performance of R. Murray Schafer’s The Crown of Ariadne. From this outstanding beginning, she has gone onto international performances with the leading orchestras and conductors of the world. In May, she will appear for the first time in Asia as part of Le French May in Hong Kong, performing Ginastera’s Harp Concerto with the Hong Kong Sinfonietta.

We spoke about Ginastera’s work and how its rhythmic drive made it such a phenomenal work for the harp. The harp can be many different instruments in Ginastera’s vision: percussive, eloquent, and, above all driven by the rhythm. Miss Gaudemard felt especially the influence of Argentina’s folk instrument, the guitar, throughout the harp part.

The third movement of Ginastera’s harp concerto opens, unusually, with the harp cadenza. Miss Gaudemard said that this was such a rewarding place for improvisation. The harp begins with the notes of a guitar, played as an arpeggio, and after that, the performer drives the cadenza. The only indication from the composer is the character: ‘Liberamente capriccioso’- or ‘liberally whimsical.’ Given that kind of freedom and given the complexity of Ginastera’s work, Miss Gaudemard said that it was a cadenza that could change: sometimes she feels it should be more dramatic in the middle and then more tranquil at the end. Sometimes she wants the cadenza to be clear and, at other times, to hide the themes a bit more. That’s the beauty of improvisation. 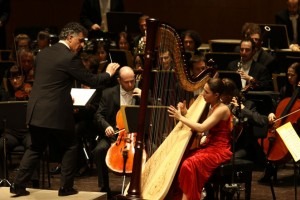 One of her important viewpoints about the harp was that it was a truly limitless instrument: it could be lyrical and percussive, it could be cold or warm in sound, and could be the voices of many different kinds of string instruments – she values composers who see the instrument’s potential and who explore and discover its ever-increasing range of sounds.

When we spoke about the history of the harp, she felt that although the instrument is international, France seemed to have an affinity for the instrument, with a large repertoire beginning with the composers in the 19th century, such as Debussy and Fauré, and continuing through today to a number of modern French composers.

After her appearance in Hong Kong, Miss Gaudemard’s future plans include appearances at upcoming summer festivals in France and Italy, a live recital for French radio, and working on her new recording of solo harp music. She said she has three harps and admitted that, for an apartment, that might be two too many!

Anaïs Gaudemard plays “Danses” by Debussy with the Münchener Kammerorchester