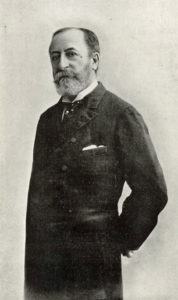 Camille Saint-Saëns (1835-1921) made his piano recital debut at age 10, audaciously telling the audience that he would perform any one of Beethoven’s 32 piano sonatas as an encore. Liszt considered him as the greatest organist on earth. Over some 40 years of composition, he wrote three major sets of piano études, Opp. 52 (1877), 111 (1899), and 135 (1912), the last of which were written for the left hand alone. He studied at the Paris Conservatoire and took up a career as an organist, and from 1858 to 1878 was the organist at La Madeleine, the official church of the French Empire. A measure of the importance of music in La Madeleine was that in 1849, Chopin’s funeral was held there.

The enlarged note heads in the second étude

His first collection of 6 études included 2 études, 3 préludes, and 2 fugues, making it from the start quite unusual. Written when he was in his 40s, this collection is that of a mature composer. The first étude is a prélude and, as in all prélude sets, is a bravura work in C major. It’s exuberant and tests the entire range of the keyboard. That done, the next étude is to test the independence of the fingers and uses an unusual notation system where, in the midst of changing chords, the one note that you should be bringing out is given a larger note head. 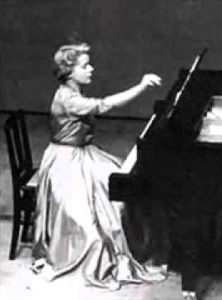 The last étude, is the pièce de resistance of the set. An Étude en forme de valse, it’s unusual from the start. A triple-meter étude, it isn’t, despite its title, very much like a waltz. It’s done at such speed as to be undanceable and yet there are periodic breaks of bravura writing – each section is difficult but for different reasons – that seems quite dancelike. This work is frequently split off from the rest of the set and performed independently.

The pianist, Ginette Doyen (1921-2002), gave her first concert at 7 years of age and when she was 10, was accepted into the Paris Conservatory. She began her career after winning several major competitions, including the Concours International Gabriel Fauré. The outbreak of WWII stalled her career but, over time, she became known for her extensive repertoire, extending from Bach to Gershwin. 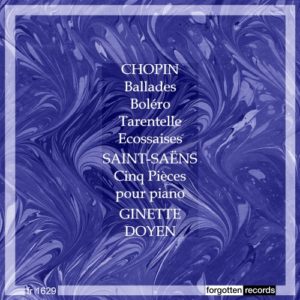