Composers Love
From the frying pan into the fire!
by Georg Predota April 11th, 2015 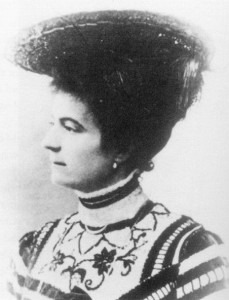 Giacomo Puccini (1858-1924) (in)famously described himself as “a mighty hunter of wild fowl, operatic librettos and attractive women.” Bravado self-assessment aside, his entire musical career hinged on the success of his second opera Edgar, began in 1884.

The music publisher Ricordi had secured financial backing from a number of prominent Milanese citizens, but during the process of composition Puccini fell in love with his former piano student Elvira Gemignani. Not a big deal, except Elvira was married to Narciso Gemignani, a wealthy grocer from Lucca. Once the press got ahold of the story, it created a huge scandal and Ricordi’s associates threatened to withhold all money. It took some rather delicate negotiations to secure continued support for Puccini’s Edgar. In the end, Edgar turned out to be an unmitigated failure, but that’s a different story.

Giacomo Puccini: Edgar
Elvira Gemignani (née Bonturi) was an amateur soprano who had once taken lessons from Puccini. She was married to Narciso, an unrepentant womanizer whose exploits were the talk of the town. Lending moral support to her decision to leave her husband, a family friend wrote to Puccini: “Among other things, it seems to me that, after all that magician Gemignani has put his family through and given his character, she can perfectly well leave him with nothing more than a letter. Goodness me, if he were a saint, and adorable husband—but a character like that!” Shortly after his mother’s funeral, Puccini and Elvira eloped for good. It seems that Narciso and Elvira had come to some sort of an agreement. It was decided that Elvira would take care of their daughter Fosca, while the son Renato remained in the care of Narciso. In the meantime, Elvira was expecting Puccini’s child and the couple moved to Monza. Tonio Puccini was born on 23 December 1886, and the proud parents enjoyed an extremely brief period of happiness. 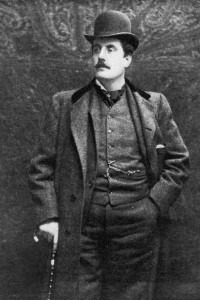 Elvira was growing increasingly agitated because she was unable to obtain a divorce from Gemignani. Puccini, meanwhile, had met a young female student on a train journey to Turin. Corinna was twenty years younger than Puccini, and the affair became so serious that the composer bought her a house only a couple of miles away from his own residence in Torre del Lago. Elvira accidentally discovered the relationship and went on a hunger strike in order to keep Puccini at home. Coincidentally, Puccini discovered that he was not the only man in Corinna’s life, and hired private detectives to shed light on her romantic situation. In a furious letter he wrote, “What an abyss of depravity and prostitution! You are a shit, and with this I leave you to your future.” Corinna predictably was not amused and threatened to make their affair public. While assorted documents passed into the hand of various legal professionals, there was finally some good news. Narciso Gemignani was killed on 26 February 1903 by the husband of a woman he had an affair with, finally paving the way for Elvira and Puccini to enter into a married relationship.

Sadly, Elvira leapt from the frying pan into the fire, while for Puccini it was business as usual as he indulged his predilection for singers bedding Cesira Ferrani, Hariclea Darclée, Maria Jeritza, Emmy Destinn and Rose Ader. Their marriage was characterized by horrendous fits of jealousy, violent fights and numerous heartbreaks, but ultimately defined by the scandal of 1909. Elivra publically accused the maid Doria Manfredi, who was working for the Puccini family, of having an affair with the composer. Doria flatly denied the allegations, but Elvira mercilessly bullied, abused and finally fired the servant. Unable to defend herself from the slanderous comments published in local newspapers, Doria committed suicide. Hoping to prove her innocence, Doria’s family called for an autopsy that revealed that the poor girl had been a virgin. Elvira was prosecuted for slander and sentenced to five months in prison. Her incarceration was barely avoided by a large payment made to the Manfredi family by Puccini. In a tragic and operatic twist to this sad story, it turns out that Puccini was actually having an affair with Giulia Manfredi, Doria’s cousin!