Composers Anecdotes
From Front to Back and Back to Front!
Joseph Haydn: Symphony No. 47
by Georg Predota February 14th, 2015
Tags: Haydn 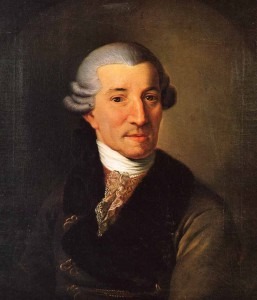 Joseph Haydn was famous for his pranks! When he was a choirboy at St. Stephen’s cathedral in Vienna in 1749, he decided to test the sharpness of a new pair of scissors by snipping off the pigtail of one of the other choirboys. Haydn was quickly expelled, but it did not hamper his enthusiasm for mischief. In fact, Haydn’s music, vacillating between earnestness and humor, can be understood as deriving from this basic duality of his personality. A friend reported during the composition of The Creation, “I discovered in Haydn as it were two physiognomies. One was penetrating and serious, when he talked about anything sublime, and the mere word ‘sublime’ was enough to excite his feelings to visible animation. In the next moment this air of exaltation was chased away as fast as lightning by his usual mood, and he became jovial with a force that was visible in his features and even passed into drollery. The latter was his usual physiognomy; the former had to be induced.”

Haydn was short in stature, undersized and painfully thin. A contemporary wrote, “His legs were so short that they hardly reached the ground. His nose was long, and beaked, and disfigured, with nostrils of different shapes. His lower jaw jutted out like a bulldog’s and his face was pitted with small-pox.” He was so dark-skinned that people thought he came from Africa, and various portraitists who drew or painted Haydn during his lifetime each took a different path in attempting to portray the attractive personality instead of the ugly face. It is one of the reasons that no two surviving portraits of Haydn are alike. Be that as it may, Haydn always knew the right things to say. When he was music director to Count Morzin in Vienna, he was sitting one day at the harpsichord, with the beautiful Countess Morzin leaning over him to see the notes, when her neckerchief came undone. “It was the first time I had seen such a sight,” Haydn explained later, “and I became confused, my playing faltered, my fingers stuck to the keys.” “What is it, Haydn? What are you doing?” cried the Countess. Very respectfully, Haydn answered, “But your grace, who would not be undone at such a sight?”

Haydn’s robust sense of humor was ever present. In his bedroom, he hung a set of twenty-four canons that he had composed. “I am not rich enough,” he said “to buy good paintings, so I have found myself hangings that few others possess.” And of course, humor frequently surfaces in his music. We only have to look at the “Farewell” and “Surprise” Symphonies or the ingenious “Joke” Quartet to find a composer whose musical procedure is of unprecedented sophistication. Haydn was probably the first composer to consciously write “music about music.” The most extraordinary and witty of Haydn’s canonic movements is the “Minuet al rovescio” from his Symphony No. 47 in G major. Composed in 1772, he later reused this particular movement in a piano sonata. Minuets usually consist of two different sections, each one repeated. But in this Haydn movement there is no separate second part. Instead, for the second part, the performer is instructed to play the music from the end to the beginning. It is a perfect Palindrome! The same forwards and backwards! The “Trio” is constructed in exactly the same way; it’s hardly surprising that this particular symphony carries the nickname “The Palindrome.”