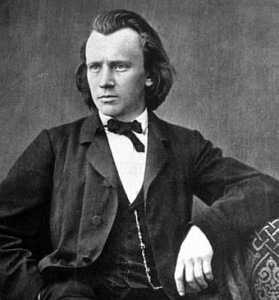 The “German Requiem” by Johannes Brahms, more so than any other of his compositions, first established the composer’s reputation among a wide range of music lovers in Germany, and subsequently secured his international reputation as well. Not unexpectedly, however, the work had to overcome some initial misgivings. George Bernhard Shaw, employed by the London Times as a music critic and concert reviewer, famously suggested that the “Requiem” reminded him of a tawdry advert for a funeral home, composed by a capable but dull simpleton. Although Shaw would eventually call his animosity towards Brahms “my only mistake,” at that time he unequivocally adored and enthusiastically promoted the music of Richard Wagner and Franz Liszt, and strongly believed in the proposed future for music and the Arts advocated by the “New German School.” It is hardly surprising, therefore, that he could not come to terms with the sacred but non-liturgical function, and the seemingly outdated and antiquated musical language of the composition.

Brahms was a baptized and confirmed Lutheran, yet highly indifferent to organized religion. For him, the bible, as he wrote to Clara Schumann “is a repository of experiences and wisdoms rather than a definition of Christian creed.” It was the death of his beloved mother in 1865 that brought his spiritual convictions into sharper focus. Brahms had been incredibly devoted to his mother and most distressed by the breakup of her marriage to his father, who was seventeen years younger. The “Requiem” was therefore a highly personal undertaking of coming to terms with his loss and concordantly a way of calibrating his spiritual compass. Clearly, the work does not function in a liturgical sense, but rather represents a meditation upon death pieced together by juxtaposing fragments from various parts of the Lutheran bible. His choice of text certainly does not represent a theological statement, but rather expresses Brahms’s religious identity and simultaneously discloses the essentially humanist nature of the work. This textual compilation — missing any obvious reference to the redemption of Christ — did clearly not sit well with George Bernhard Shaw. However, Brahms’s close personal friend, the organist and theologian Carl Martin Reinthaler — who trained the choir for the first performance — was also highly critical of the text. Brahms wrote to Reinthaler that the focus of his personal faith was to comfort the living, “and that he was less concerned with the spiritual destiny of the departed.” In an effort to appease Reinthaler and the Bremen clergy for the first performance at Bremen Cathedral on Good Friday 1868, Brahms agreed to insert the aria “I know that my redeemer liveth” from Handels’ Messiah. This first performance still featured six movements, however, Brahms eventually decided to add one more — this became the 5th movement in the finished order — which openly references motherly love, and therefore more readily acknowledges the emotional source of the work. The finished text is shaped by a gradual shift of focus from the subjective experiences of the living to the beatific state of the dead and the promise of their eventual resurrection. The outer movements, entirely contemplative in tone, are echoed by the central chorus “Wie lieblich sind deine Wohnungen” (How lovely are thy dwellings.) Complementary features radiate from either side of this central movement, with the third and fifth featuring baritone and soprano soloists, respectively, and movements two and four “follow analogous progressions from human transience to affirmation of divine power and glory.” In its final version, the “Requiem” displays a remarkable textural and musical symmetry — a feature clearly missed by George Bernard Shaw — with the interaction and relationship between text, instrumentation and musical style emphasizing an essentially organic and entirely human quality. 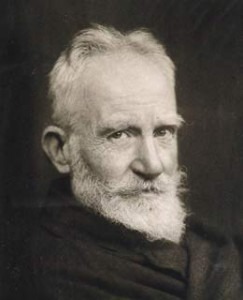 Franz Liszt proudly proclaimed that the future of “sacred music should combine theater and church on a colossal scale,” a notion that clearly resonated with George Bernard Shaw. Brahms clearly could not have disagreed more. For him, the age of Romanticism was less an age of church music than it was one of literature about church music. The primary reason for this sentiment was found in the separation of the aesthetic and liturgical aspects of church music. Carl Dahlhaus suggested, “that the central concept of the bourgeois attitude concerning church music was edification, and as such, was related primarily to the congregation with the object of instilling devotion. Aesthetically therefore, the means of kindling devout sentiment, whether humble or uplifting, was found in the ideals of noble simplicity and silent grandeur.” This sentiment gave rise to a movement within the Roman Catholic Church named after St. Cecilia, the patron saint of music. To counter the intrusion of secularized styles and idioms, the movement forcefully advocated the cultivation of Gregorian chant, vernacular hymnody and compositions in the style of Giovanni Pierluigi da Palestrina. Brahms was an avid collector and editor of old music — although clearly not interested in the Roman Catholic Church — and had a profound antiquarian and musicological interest in the music of the past. Although Brahms did not reference Gregorian chant, his musical setting clearly does reflect his almost academic preoccupation with religious music of the past. Echoes of Beethoven’s “Missa Solemnis” contrast with expansive Handelian fugues and solo passages that seemingly harken back to an 18th-century oratorio tradition, and even feature the austere gravity of the choral settings of Heinrich Schütz. The vocal apparatus is supported by a thoroughly Brahmsian orchestration, featuring the unmistakable blend of interlocking melodic solos and duos supported by richly figured accompaniment. The harmonic language consciously creates tonal mixtures between the major and minor modes — with a dash of modality thrown in for good measure — while the dramatic pacing is certainly operatic. It’s hardly surprising that George Bernard Shaw could not come to terms with this eclectic profusion of styles. Brahms told Reinthaler that the word “German” in the title primarily referred to the language rather than an intended audience. Brahms suggested that he would “gladly call the work ‘Ein menschliches Requiem’” (A Requiem for humanity), and that sentiment is clearly reflected in his extraordinary textual choices and multidimensional musical setting.