Artists Behind the scenes
On Tour with the Clare College Music Society
by William Cole September 21st, 2012 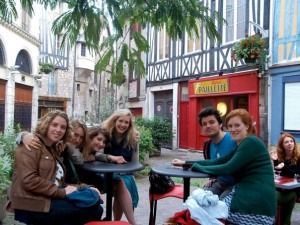 Some singers and players in a cafe in Rouen.

Walking into Rouen in search of some refreshment late on our first evening in France, we passed the grand Abbatiale Saint-Ouen, Rouen’s second major church and the venue for the second concert of our CCMS tour. As Tour Manager, I recognised it from the photos that our host festival, Musicales de Normandie, had sent us months before. But for most of the tour party, a 50-strong collection of Clare students, other Cambridge musicians and a few players from London music colleges, this was their first sight of this extraordinary building, and their astonishment was universal. I had to pinch myself too – though each Cambridge summer is full of college choirs touring to exotic locations (I’m off to Australia next week with Clare Choir) and the occasional orchestra tour, this was the first time a college music society had ever dared to venture beyond the Fens, and for the first few days I couldn’t quite believe that we were there. 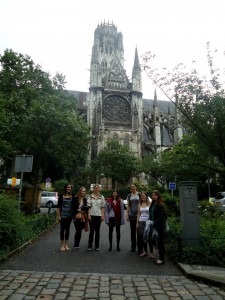 Some singers outside the Abbatiale

The tour owed its existence to the vision of the CCMS President Héloïse Werner, whose godmother runs a music festival in the tiny village of Aubazine, Corrèze. An invitation to perform Haydn’s The Creation there was followed by the offer to perform twice in Normandy, first in St-Valéry-en-Caux, a beautiful coastal town near Dieppe, and then in the Abbatiale in Rouen. Exciting as this was, Héloïse and I had our work cut out to get everything into shape – compared to the college choirs, we had little experience of organising such a venture and little in the way of financial resources. Almost a whole year was spent booking musicians, organising travel, sorting accommodation and much more, and so it was relief that we heard the first notes of our two days of rehearsal in London before we set off for Rouen.

And what first notes they are. For anyone who doesn’t know The Creation, it starts with Chaos – in one of the most remarkable passages of music ever written, and surely some of the most extraordinary chromaticism before Wagner, Haydn depicts the universe before God’s creation, a sort of musical primordial soup if you like. It’s a fittingly vivid way to open the work – the narrative of the Creation inspired Haydn to some of his most colourful and inventive music. Perhaps work’s most famous moment is at the words ‘Let there be light’ – after a murky, indistinct and fantastically quiet passage for solo bass and choir, the whole chorus and orchestra erupt into a blaze of bright C major as light fills the heavens. But the rest of the work is full of wonderful musical images – the violas and cellos imitating ‘great whales’, dancing rhythms for ‘flexible tigers’ and a resounding bottom D from the bass soloist as he sings of the ‘sinuous trace’ of the worm. 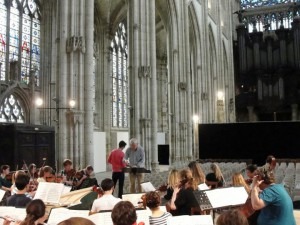 The choir and orchestra rehearsing in the Abbatiale d'Ouen in Rouen, with Nicholas Mogg baritone, Tim Brown conductor

It’s a bright, joyous work, and it suited our purpose well both in its youthful energy (despite Haydn’s old age when he wrote it) and in its universality – as opposed to the Christmastime associations of Handel’s Messiah or Bach’s Lenten Passions, The Creation can be performed at any time of the year. The work is of course in German, but was written during the period of great fame that Haydn enjoyed in London near the end of his life, and so there is an original English version. Strangely enough, it seems that it was in part this translation that our French audiences were so keen to hear – the official publicity invited people to hear this work ‘in the wonderful language of Shakespeare’, though I dare say the translation leaves a little to be desired when compared to the works of great playwright! Indeed, we made very welcome during our tour, one of the great joys of our trip was the hospitality of the two festivals. Though we certainly experienced wide range of acoustics, from the deadest acoustic I’ve ever experienced in St-Valery-en-Caux to the 10-second echo of the Abbatiale, we were consistently treated to marvellous food and wine, and in Aubazine we had the rare privilege of staying in the same buildings that had held the local monks for hundreds of years. Judging by the healthy audiences at all of our concerts, the festivals had clearly done a lot of publicity work too, with a poster for our Rouen concert seemingly in every shop window and on the cover of the local paper as well.

Though perhaps those audiences are representative of a more continental attitude to music and the arts in general. On that first night in France, we didn’t find a pub, but we did find, on entering Rouen Cathedral, hundreds of people watching a silent film, with improvised accompaniment from a few local musicians, as if it was the most normal thing in the world. Now I’m sure that doesn’t happen every night, but I was quietly thunderstruck that such an event would happen at all, let alone on a normal weeknight when most people are probably just at home watching TV. We found something like the same attitude in Aubazine – our concert was clearly a major event and everyone in the village came to listen. This attitude is not just incidental – the knowledge that hearing the music we were making was truly important to our audience was I’m sure the catalyst for the great performances that CCMS gave during the week. I would not be so presumptuous to say that such an attitude is absent in Britain – full audiences at the current Proms season certainly suggests otherwise. But that sense that the arts are not just a luxury, but something that unites and brings meaning to whole communities, is still with me a week after we got back, and was a timely reminder in this day and age of music’s power and, especially in a work depicting the creation, its universality.