Artists Interviews
Manuscripts and Technology
An Interview with Nicholas Kitchen of the Borromeo Quartet
by Maureen Buja January 10th, 2017 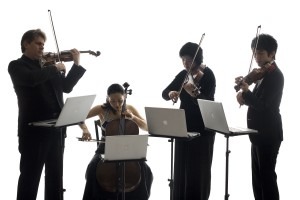 Founded in 1989 by students at the Curtis Institute for Music, the Borromeo Quartet has grown over the last decades into a quartet of power and assurance. Of interest in the past few years have been their explorations of the Beethoven string quartets, but, by coming at them with a musicological and historical examination of the manuscripts, the quartet has taken a new approach to the music.

We spoke recently with Nicholas Kitchen of the Borromeo about the very different approach that the Quartet takes to original sources and technology. One example will suffice: a video of a 2013 performance shows them playing from Apple laptops, using foot pedals to turn the page. Upon closer examination, it appears that the quartet is actually playing from Beethoven’s original manuscript.

This is part of their innovative use of technology. Unusual for a quartet, they do not perform from parts but from the full score and from the manuscript full score at that. They admit that this has changed their rehearsal and performances because they are now aware visually, as well as aurally, of what the other players have in front of them. Playing from parts means that you only know what’s on your stand: playing from a score means that you can see everyone else’s music as well. Kitchen said that it made rehearsals more efficient and that each member of the quartet understood what was written in the others’ parts, and hence has a deeper understanding of how the parts fit together.

It was in discussion with Professor Lewis Lockwood of Harvard that Kitchen was encouraged to go to the Beethoven Haus in Bonn to talk to editors and musicologists of the Beethoven edition and to look at the original Beethoven manuscripts. It was then that he discovered that all that was in a modern score, even in a critical edition, was not necessarily what was in the manuscript. One example that he gave was of Beethoven’s dynamic markings: most editions use about 7 (ppp – pp – p – mp – f – mf – ff ). It was only through looking at the manuscript that Kitchen discovered that there were, in fact, 20 different dynamic markings used by Beethoven in a systematic way. That knowledge has changed how the quartet approaches music that they thought they knew so well. Here’s an example of a pianissimo–but with a double underline (different from ones with no underline or a single underline)–that Kitchen will be discussing in his presentation in March at the Hong Kong International Chamber Music Festival. 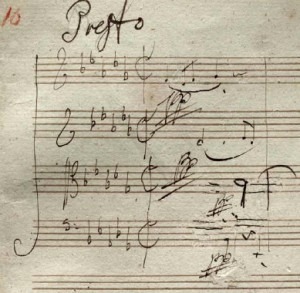 Double-underline pianissimo marking in Beethoven’s hand from his String Quartet No. 10, Op. 130, movement II (used with permission of the Library of Congress).

Another use of technology is that they record every concert they perform. Starting in 2002, they have recorded every concert in both audio and video. They keep this tremendous repository of music so that they can review and discuss their recent performances. In January 2017, they will be issuing their recording of Bach’s Well-Tempered Clavier, book 1, arranged by Kitchen for the Borromeo String Quartet. Kitchen indicated that the entire process of writing out the preludes and fugues for the 4 voices of the quartet enabled them to reimagine Bach’s counterpoint as dialogue. Over the past year, they have tried out the material in concert: one entire performance of the whole collection takes 3 hours (with 2 intermissions). The recording will be available via their website, LivingArchive.org.

The Borromeo Quartet approaches the usual repertoire and the usual performance methods from a different angle. The use of original manuscripts and scores for their performances enables them to move their thinking about a work more directly onto the stage and we, the audience, benefit from that.