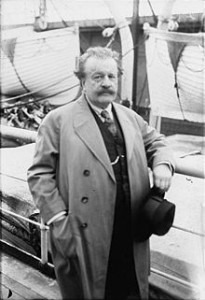 It’s always amazing how close the past can be. The Polish pianist Moriz Rosenthal (1862-1946) was one of the leading students of Franz Liszt, who we think of as the height of the Romantic era, and also saw some of the greatest composers of the late 19th and early 20th centuries as his friends and colleagues, including Brahms, Saint-Saëns, and Albéniz, thus taking us from the Romantic to nationalistic modern movement through one vector.

As with many of the great pianists of his era, his piano studies started early, and by age 8 he had his first lessons. By age 10, he was at the Lviv Conservatory and by age 12 he was in Vienna as a student of Rafael Joseffy. He made his debut in Vienna in 1876 and his appearance in Romania led to his appointment as Court Pianist at age 14. He studied with Liszt in 1878 and 1879 and remained in contact with him until Liszt’s death in 1886. In addition to his piano work, he also indulged his intellectual side with a full rounded education at the Vienna Staats Gymnasium, culminating in a philosophy degree from the University of Vienna. He taught at the Curtis Institute of Music from 1926 to 1928 and then opened his own piano school in New York in 1939, teaching there until his death in 1946.

Rosenthal’s recording career can only be measured in a few hours, but it’s fortunate that he recorded on some of the best recording-pianos of the era, the Amipco piano. In this recording of the Chopin E flat Nocturne, you can hear his intellectual approach to a piece that in other hands is merely familiar.

When I wrote at the beginning about the past being so close, we can look at Liszt teaching Rosenthal who taught Charles Rosen (1927-2012), thus we see the 19th century line of Liszt extending to the 21st century.