In Tune Arts
The Interplay of Art, Music and Dance
by Ursula Rehn Wolfman May 14th, 2017 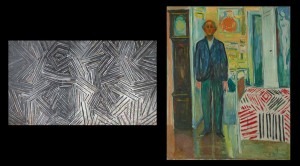 ‘Between the Clock and the Bed’
Jasper Johns vs Edvard Munch

In this second of two articles I will briefly return to the relationship between Edvard Munch, the Norwegian Expressionist, and Jasper Johns, the American Abstract Expressionist, and then continue the discussion of Johns’ relationship to other artists and art forms, such as the works of the choreographer Merce Cunningham, the composer John Cage and the painter and sculptor Robert Rauschenberg. 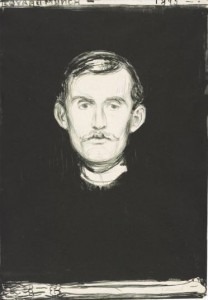 The first example of Johns’ conversation with other paintings is Munch’s painting ‘Between the Clock and the Bed’, and Johns’ painting of the same title. Munch’s bedcover becomes the abstract subject and sole content of John’s painting. Munch and Johns had also been influenced by Matthias Grünewald’s ‘Isenheimer Altarpiece’, in that it became a reflection of life and death for both of them. 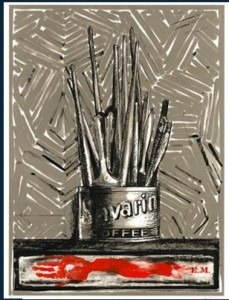 Johns’ Savarin Paint Can with Brushes

At the bottom of Munch’s Self-Portrait and Johns’ Savarin Paint Can with Brushes we see a skeleton arm. In Munch’s painting his own face, black and white, emerges from a dark background, like the face of a ghost, detached from a body. In Johns’ painting the Savarin can and brushes (both of which he really used in his studio) are colorless, contrary to what they would have been in reality. 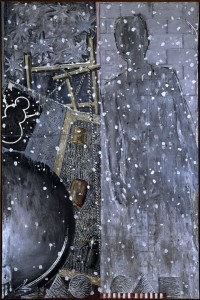 The greyish hatched abstract background is a reminder of Munch’s bed cover. Below the Savarin can, next to the blood-red skeleton arm we see the initials E.M – for Edvard Munch– emphasizing Johns’ personal reflections and the connections to Munch’s work. Johns’ painting ‘Perilous Night’ with the suspended, mottled arm imitates not only the mottled skin of the dead body of Christ in the Predella of the Isenheimer Altarpiece, (opening its dialogue with the Renaissance Altarpiece and Paul Hindemith’s composition Mathis der Maler mentioned in my previous article), but also refers to the skin disease, St. Anthony’s Fire, and the healing properties offered by the monastic order which had commissioned the altar. 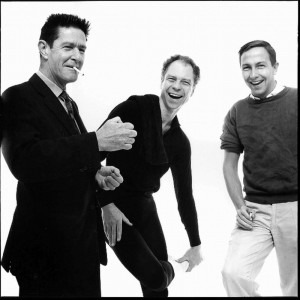 In the 1960’s, Johns began to collaborate with the painter and sculptor Robert Rauschenberg, the choreographer Merce Cunningham and the composer John Cage – with a new language starting to emerge. The body, shown as a shadow or silhouette, as in Johns’ painting ‘Winter’, not only started to reappear in Johns’ works, but overlaying images and textures, and experimenting with important elements of memory and perception took their combined creative works into a new dimension. The spectator now became a more active participant in the performance of reading the art work, challenged by the concepts of representation and illusion. John Cage and Merce Cunningham were moving in the same direction in music and dance. 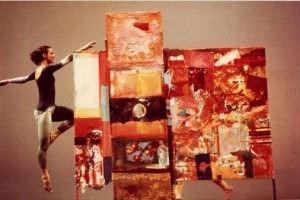 With Rauschenberg and Johns joining them as artistic advisers, they all became immersed in dance and performance. Cunningham choreographed dances, such as Walk Around and Minutiae, which coexisted in time and space with open-ended scores by Cage, in which music did not necessarily follow the dance movements — each could be, and was created separately, brought together only at the performance. 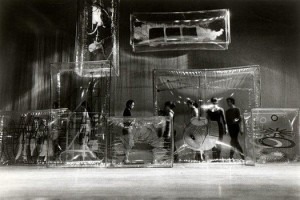 Often, the dancers rehearsed without music in silence, hearing the music only on opening night. Their ‘chance operation’ was enhanced by Johns’ and Rauschenberg’ collages: works of art without unity and fixed boundaries, fascinating in their richness and multiplicity of direction. Many other famous artists, such as Frank Stella, Andy Warhol, Robert Morris and Bruce Nauman, just to name a few, also collaborated with Cunningham and Cage.

Stillness, silence and time became the foundation for Cage’s compositions, which in turn inspired and fostered the extraordinary collaboration of these amazing artists, taking the arts into new and exciting directions.