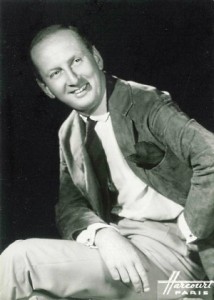 French pianist Jean-Claude Englebert (1923-2011) was born in Paris to a family of musicians. His father, Oscar, was a renowned violist and his mother, Suzanne, was a concert singer. He attended the Paris Conservatoire, taking the first prize in music theory in 1937 and the first prize in piano in 1943. His touring career took him throughout Europe, North Africa, and England.

He was known as a great interpreter of the music of Schumann, Chopin, and Ravel. He taught at the Conservatoire in Reims from 1962 until his retirement in 1984. After his retirement, he took up painting.

In this performance of Ravel’s Jeux d’eau, Englebert carries both elements of the play of the waters: their flowing qualities and their ability to catch the light and shine. Recorded in 1959, this performance captures Englebert’s skills in the French repertoire.

In Ravel’s Sonatine, also recorded in 1959, Englebert uses Ravel’s highly contrasting piece built around a leaping-fifth melody as a vehicle for his own expression. Dynamics and tessiture vary throughout the work, giving us a piece that captures so much of the French piano style.

The wildness of Ravel’s Valses nobles et sentimentales, with its blend of Impressionist and Modernist styles, challenged its initial audience enough that they booed the anonymous work. The audience was then supposed to write down who they thought the composer was and a wide range of composers were guessed, however Ravel received, in his words “the minute majority” of votes. In his performance, Englebert shows us all sides of the waltz in both its bravura and its sadness.