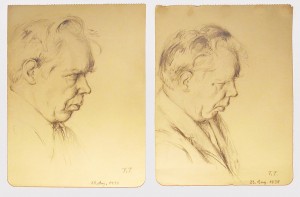 Bringing Bach to the 20th century was the fame of Swiss pianist Edwin Fischer (1886-1960). After first studying music in Basel, Switzerland, he went on to attend the Stern Conservatory in Berlin, where he studied with Martin Krause, one of Liszt’s last students. He was known as a phenomenal teacher even before becoming a performer and conductor. He started his solo career after WWI. He became the conductor of the Lübeck Musikverein in 1926 and then formed his own chamber orchestra in 1932. He also conducted both the Berlin and Vienna Philharmonic Orchestras.

His particular area was music of the Baroque and early Classical era, hence his interest in Bach. He was one of the first to start to look at performance practice of the earlier eras, joining other performers such as Arnold Dolmetsch and Alfred Deller who started to experiment with the interpretation of earlier music. We wouldn’t necessarily look at Fisher’s work today as being historically true, particularly in view of current research, but he did return to such classical norms such as conducting from the keyboard, as in this performance of Mozart’s Piano Concerto No. 25 with the Vienna Philharmonic.

Mozart: Piano Concerto No. 25 in C Major, K. 503: II. Finale: Allegretto (Edwin Fischer, piano; Vienna Philharmonic Orchestra; Edwin Fischer, cond.)
In 1931, Fischer began a long association with the HMV recording company, recording for them for the next 11 years and resuming again after WWII. His recording of Bach’s Well-Tempered Clavier is considered a landmark – his was the first full recording and still remains one of the finest recordings of the work.

One critic viewed Fischer as ‘represented an ideal middle ground between objective intellectualism and unabashed romanticism.’ Noted pianist and critic Paul Badura Skoda wrote of Fischer: ‘One hesitates to refer to a concert artist as a “genius”. But when Fischer played, he convinced his audiences that interpretation can and should be a creative art. In his view, to “create” and to “re-create” were practically synonymous. There were moments of indescribable emo¬tional ecstasy in his performances, moments when he became a prophet. The listener stopped taking notice of the instrument and the performer when the music began flowing directly into his soul in its own idiom, pro¬ducing a kind of religious experience.’