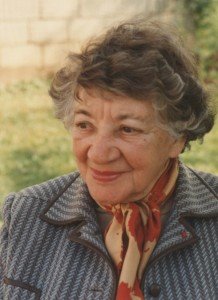 Lucette Descaves (1906-1993) was a student of Marguerite Long’s at the Paris Conservatoire, her students, in turn, were equally distinguished, including the young Michel Legrand, and, Jean-Yves Thibaudet, Pascal Rogé, and Katia and Marielle Labèque. After she retired from the Conservatoire in 1976, she continued to teach at the Rueil-Malmaison conservatory, which had been founded by one of her students, Jacques Taddei.

As a pianist, her career focused much more on music by contemporary composers, including André Jolivet, for whom she performed the premiere of his Piano Concerto.

She also championed other French composers such as Ravel or Albert Roussel, recording Roussel’s complete piano works. Yet, she also had a sure touch with the classical composers such as Mozart, here performing his Theme and Variation set, K. 354, “Je suis Lindor,” which was recorded in 1956 for the 200th anniversary of Mozart’s birth.

Her performances were praised for their “rhythmic acuity, evocative phrasing and effortless virtuosity,” all of which is evident in these recordings.