Artists Behind the scenes
The Sorcerer’s Apprentice
He set the Piano Stool on Fire!
Alfred Brendel and Kit Armstrong
by Georg Predota September 19th, 2017 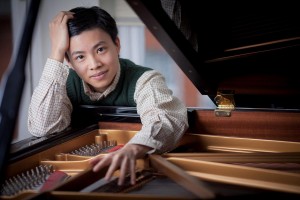 On rare occasions, musical aptitude strikes without warning. I am pretty sure that’s what the British-Taiwanese parents of Kit Armstrong must have been thinking when their son, age 5, and without access to a piano, taught himself musical composition by reading an abridged encyclopedia. Recalling his musical beginnings, he says, “Initially, I composed monophonic music, just one single line of notes, not even particularly melodious. And at one point, I realized I had to make it sound good. Then we got a piano, and I started to write melodies with harmonies. I began to figure out which chord would like to be followed by which other chord. I worked out my own primitive version of harmony, and theory, and voice leading.” His talent apparently had revealed itself even before his first birthday, and according to his mother, it was mathematical. “If he was asleep and needed waking up,” she says, “all I had to do was give him a maths problem.” No wonder that he became the youngest math student at Chapman University in California, and his research in algebraic geometry and topology has taken him way beyond PhD level. And wouldn’t you know it, he also excels at Origami and programs computer games! 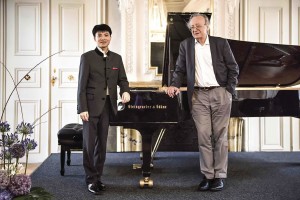 The first serious musical compositions emerged at 7, and when Benjamin Kaplan at the Royal Academy of Music in London watched his 11-year-old student learn a formidable eight-page Debussy piece by heart in 45 minutes, without touching the piano, he astoundedly suggested, “I don’t like bandying the word genius around,” says Kaplan, “but this was much more than mere talent.” Alfred Brendel first heard Kit play at 13 and considered him “a born Bach player.” Initially, Brendel was not particularly interested in taking on a young student. “You don’t employ a mountain guide to teach a child how to walk,” he recalled. But then he listened to a recording of Beethoven’s Les Adieux, and found the “first two movements remarkably well played.“ And when Brendel listened to Kit’s performance of the Chopin B-flat Nocturne, he thought to himself, “I have to make time for him. It was a performance that really led you from the first to the last note. It’s very rare to find any musician with this kind of overview and the necessary subtlety.” Brendel described Kit as “the greatest talent he has ever encountered,” and he has been his teacher ever since. 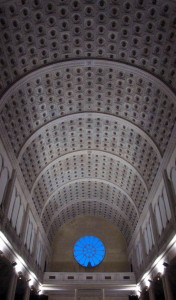 Kit has problems with much of Tchaikovsky and Mahler, as “I don’t like swimming in music.” And he has no ear for modernist experimentation, and that includes Stravinsky’s Rite of Spring. He likens music to an auditory cheesecake; “Every chef knows that a cheesecake is a work of art to be enjoyed, rather than something which must be ‘interesting’” Looking to realize his personal musical vision and performance space, Kit bought a church! The engineer Aimé Bonna, at his own expense, originally constructed Sainte-Thérèse-de-l’Enfant-Jésus de Hirson in 1919. Bonna had made a fortune with his invention of reinforced concrete, and unsurprisingly, he used the very same material for his church construction. Internally, the church was decorated in art deco style and featured 1500 plaster roses, symbolizing the roses spread by St. Therese. Unfortunately, Bonna died six months before his project was completed and the building fell into disrepair. As such, with community and municipal support, Kit Armstrong purchased the structure in 2012 and refurbished it as a concert hall. Featuring concerts and exhibitions for the community, Kit is “trying new ways of presenting music and attempting to rediscover unknown or unappreciated literature.”