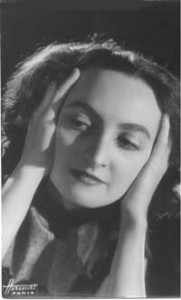 Claire Delbos was the daughter of a Sorbonne professor, a member of the prominent new music society “La Spirale,” and an accomplished violinist and composer. Predictably, she studied at the Paris Conservatory and quickly crossed paths with another highly talented student at that institution, Olivier Messiaen. He was drawn to her expressive way of playing the violin, and they soon performed together in a number of recitals throughout Paris. Emotionally, Claire’s entry into Olivier’s life is encoded in The Death of Number, a work first performed on 25 March 1931. Messiaen, who had just lost his mother, played the piano and Claire’s violin mediated between the First Soul and the Second Soul. Their emotional bond deepened, and by June 1932 the couple was married. As a wedding present he gave her a set of Theme and Variations, and eventually more forthrightly and passionately expressed the bliss of marital love in the Poèmes pour Mi for soprano with piano or orchestra. As you might have guessed, “Mi” was Claire’s nickname and the entire song cycle predictably centers on the pitch E. Claire also composed several organ pieces for her husband, and also set to music a number of poems written by Cécile Sauvage, Messiaen’s mother. 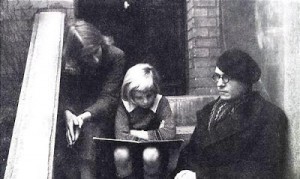 Olivier Messiaen wearing a beret , sitting on the steps leading to his Parisian House ( 19th arrondissement ) , with his first wife Claire Delbos and son

In spite of a long series of miscarriages, the couple enjoyed a devoted and romantic marriage, and in 1937 Claire gave birth to their only son, Pascal. In Olivier’s Chants de terre et de ciel of 1938, all three members of the family are portrayed. And here as elsewhere, Messiaen wrote his own texts. The joy of family life was brutally interrupted by the arrival of World War II, and Messiaen was drafted into the French army. In a number of diaries he recorded the daily struggles of life during the war years, and that includes his time spent in a prisoner of war camp. But the real tragedy was yet to come. Messiaen was released in 1942 and happily resumes family life with Claire and Pascal, while simultaneously taking up a teaching position at the Paris Conservatory. However, Claire’s health had begun to deteriorate, and she underwent routine surgery in 1949. But something went horribly wrong during the medical procedure and Claire was left with total amnesia. She was placed in a nursing facility, and touring schedule permitting, Messiaen visited her every day. Claire’s health steadily declined and she remained institutionalized for the rest of her life, dying of cerebral atrophy in 1959. 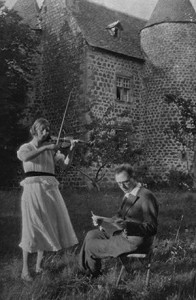 With his wife succumbing to illness, the young genius Yvonne Loriod became the focus of a love that Messiaen could only express in music. She had been a child prodigy, having memorized all of Beethoven piano sonatas and Mozart piano concertos by the age of 12. And by age 14 she had added the entire Bach Well-Tempered Clavier and the complete works by Chopin and Schumann to her repertoire. Once she joined Messiaen’s harmony class in 1942, she also played his Eight Preludes from memory, “It was pretty easy,” she recalled, “God gave me a very good memory.” Within months of their meeting she became his muse, and they fell in love. Messiaen was bringing up his young son Pascal on his own, and as a devout Roman Catholic he could not divorce his infirm wife. Nor could he ever commit adultery. “So we cried,” recalled Yvonne, “we cried for nearly 20 years until Claire died and we could marry.” Messiaen’s entire oeuvre for piano composed after 1943 was written for Yvonne. He suggested that he allowed himself the “greatest eccentricities in his scores because he knew that she would master them effortlessly.” And that includes the fiendishly difficult piano part for his Turangalîla Symphony of 1948, a work that became an expression of his sexual frustration during his years of celibacy. Not everybody was enchanted, and Boulez considered it a “massive vulgarity.” 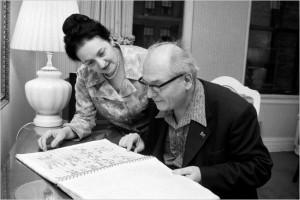 Two years after Claire Delbos’s death, Messiaen married Loriod in 1961 and the couple had a working honeymoon in Japan, which resulted in the orchestral work Sept Haîkaï. For the next 30 years of Messiaen’s life, Yvonne was not only his muse, but also his collaborator and a celebrated interpreter of his music. For example, she produced the vocal score of his massive opera Saint François d’Assise, which took the better part of two years. They traveled extensively, visiting the canyons of Utah in 1972 and Australia in 1988. On the home front, they led a simple and devout religious life, and Messiaen remained organist at the Church of the Holy Trinity in Paris until his death in 1992. Following his death, Yvonne devoted herself to his memory. She discovered, edited and published a number of works she found among his papers, and continued to appear on stage. All she wished for, was “a good death, so that I can go to heaven and be by his side.” Loriod died on 17 March 2010 in Saint-Denis, at the age of 86.