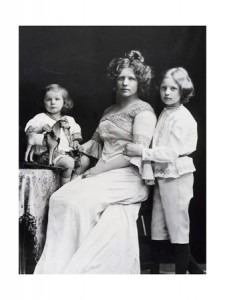 Gerda Sjöstrand and her children

At age 22, Ferruccio Busoni (1866-1924) was appointed piano teacher at the conservatory of Helsingfors, then part of the Russian Empire, today known as the Finnish capital Helsinki. Stable employment and income aside, Busoni could not speak a word of Finnish, Swedish or Russian, and he progressively became lonelier, confused and more depressed. He wrote to his mother, “This solitude even if interrupted by continual occupation, is terrible. In the evening, when I have finished my work, I am forced into one or two hours of doing nothing, after which I feel a most painful sense of emptiness.” His colleagues Martin Wegelius, Richard Faltin and the composer Jean Sibelius, who was at that time a student at the Conservatory, did their utmost best to ease his discomfort but nothing really worked. But then on 18 March 1889 everything changed! At a dinner dance following a charity concert, a young woman with blond curls, a lively expression and a very attractive figure was brought to his table. Her name was Gerda Sjöstrand, daughter of the Swedish sculptor Carl Eneas Sjöstrand. And sparks started to fly immediately!

Gerda later recalled, “Busoni quickly rose, greeted me gaily and immediately ordered champagne. I looked at him astonished. His beautiful chestnut hair, golden at the temples, formed a halo round his head. He spoke in a very lively and eager manner and laughed a lot, very heartily, so that you had to join in, whether you wanted to or not. ‘So, you are a pianist,’ he said, ‘and what are you studying right now?’ ‘The Erlking,’ I shot back boldly. ‘Oh, oh’ he said, ‘even I can’t play that.’ Then my sister came from the dance floor and joined us. ‘You are a painter, as I have heard. Can you paint?’ ‘No!’ she said. ‘Funny, one is a pianist and can’t play, the other is a painter and can’t paint.’ We all burst out laughing and the whole room turned round to stare at us.” Two days later, Busoni left tickets at the Sjöstrand house for a concert the following day, and barely a week later, Busoni invited Gerda to a small restaurant. After the meal, Busoni stood up bent over to Gerda and said, “Will you be my wife,” and he kissed her. “I said nothing, I was stunned,” and when a mutual friend came through the door, Ferruccio exclaimed, “We’ve just got engaged!” The next day Busoni approached Carl Aeneas Sjöstrand and formally asked for Gerda’s hand in marriage. Sjöstrand had studied in Italy and spoke fluent Italian, and he immediately gave his consent. With the terms of engagement agreed upon, Ferruccio insisted on putting an announcement in the local paper, “that exploded in the town like a bomb.” It would still be several months before Ferruccio would tell his own parents. 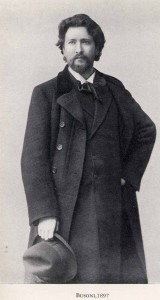 As the end of his first academic year in Helsinki was rapidly approaching, Busoni made plans to go to Weimar and devote his summer to composition. Hard as he tried, Gerda would not agree to join him. Gerda was charming, but she also was totally honest. She told him that the relationship had to be tested, and that he needed time alone to compose and think of his future. In her first letter to him after he departed for Germany, she wrote, “Ferruccio, that was terrible, to see you going away. I didn’t think it would be so difficult. Perhaps I looked quite calm, but I had a feeling as though I wanted right at the last moment to hop on to the ship and shout loudly in front of everyone, ‘I will come with you.’ Ferruccio, tell me quite honestly, aren’t you glad now that I didn’t come with you? It was a lovely time, these two months, the most wonderful I’ve had in my life. I thank you for that, Ferruccio, for all the beautiful, wonderful things you have given me, for your company, for your goodness, for your love, for everything, everything.” Countless letters, full of passion, frustration, longing and at times agony on both sides, were ferried back and forth between Weimar and Helsinki. Since Gerda had received a rather liberal education—she frequently modeled for her father and had participated in a number of theater productions during her student years in Berlin—Ferruccio’s letters often contained expressions of jealousy, suspicion, rage, and unreasonable demands. In her letters, Gerda complained about the unfairness of his accusations, but she also expressed dignity and appealed to reason. In hindsight, we would probably call it the usual angst and agony of young love temporarily frustrated. “Gerda was surprisingly understanding, tolerant and patient in dealing with these outbursts, and eventually she managed to broaden his moral stance as to what a respectable woman could and could not do!” But first, they had to deal with Ferruccio’s mother, Anna Busoni! You probably can guess where this story is heading next!

Ferruccio Busoni: Kultaselle (To the beloved)