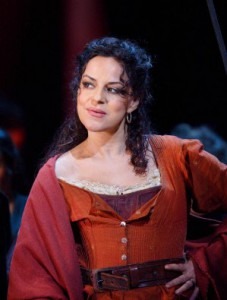 Opera dominated the musical life of most European cities in the nineteenth century. People from all social classes could participate in the theatrical form by simply buying a ticket. In lavish settings, audiences marveled at singers and musicians combining text, music and movements on stage, commonly with the use of stage machinery and costumes. The unrivaled popularity of opera assured that it had an extended following away from the theatrical stage as well. It surfaced in various derived forms, which included reductions for voice and piano, transcriptions, variations, and paraphrases intended to be performed in bourgeois salons, living rooms and the concert stage. Performance was both a musical and social event, with audiences listening to pieces linked to the most popular productions of the time. So let’s get started with one of the most popular operas of all times, Carmen by George Bizet.

George Bizet: Carmen, Act 1 “Prelude” (piano 6 hands)
Unfortunately, Georges Bizet (1838-1875) did not live to see the unbridled success of his opera Carmen. Premiered at the “Opéra Comique” in Paris on March 3, 1875, critics quickly rejected the opera, and it almost had to be withdrawn. It has been suggested that the theater even had to give away free tickets in order to boost attendance. When Bizet died of a heart attack at the age of 36—a mere three months after the premiere of Carmen—it was suspected that the negative reception contributed to his untimely demise, and the opera was quickly withdrawn. However, within three years Carmen made triumphant appearances in Vienna, Brussels, London, New York, Germany and Russia. Johannes Brahms is said to have attended more than twenty performances, and he rightly considered it the greatest opera produced in Europe since the Franco-Prussian war. And as you might well imagine, numerous transcription for household use and for the concert stage quickly followed.

Jenő Hubay: Carmen fantasie brillante, Op.3, No.3
The Hungarian violinist and composer Jenő Hubay (1858-1937) first appeared on the concert stage at the tender age of eleven. His exceptional talent was quickly recognized, and he received instruction from Joseph Joachim in Berlin. In 1878, on the advice of Franz Liszt, Hubay gave his international debut in Paris. The 18-year-old virtuosos was said to combine the “enthralling personality of Franz Liszt, the facility and subtle virtuosity of Vieuxtemps, the philosophical calm and the depth of Joachim, and the Polish passion of Wienawsky with his Hungarian impulsiveness.” Hubay became a superstar overnight, and continuing in the tradition of the traveling virtuoso, Hubay composed a substantial number of encore pieces based on operatic themes and subjects. Among them is his Fantaisie brillante on Bizet’s Carmen, Op. 3, No. 3, written in 1877.

Kaikhosru Sorabji: Bizet’s Carmen, “Habanera”
The composer Kaikhosru Sorabji (1892-1988) was best known for his pursuit of extremes! His piano works feature dazzling difficulties, and his Opus Clavicembalisticum of 1930 was listed in the Guinness Book of World Records as the “world’s longest non-repetitive piano work.” Rather unusual for an active composer was his unique ban imposed upon public performances of this works. As a result, and despite high praise from Busoni, Cortot, Delius and Szymanowski, his compositions remained largely unknown until the late 1970’s. In his unusual take on Carmen, one critic suggested that “Carmen’s tobacco factory has moved to a marijuana field,” for the famous melody is subjected to pitch distortion, fantastic embellishment, and to an array of contrapuntal devices. Carmen arrangements, however, have not been in the exclusive domain of the violin or the piano as is amply demonstrated by this cheerful rendition for 4 clarinets!