In Tune Society
When a factory becomes a concert hall
by Rudolph Tang February 16th, 2018 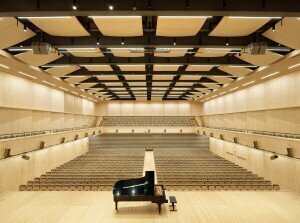 A brand new concert hall built on a former industrial site reinvigorates the city and unveils a new chapter for its local orchestra. Sounds like an exemplary story from Hamburg. Well I am actually referring to Zürich in Switzerland. 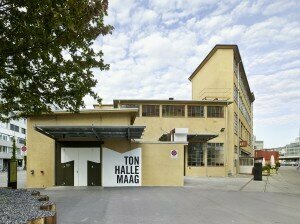 Since Zürich’s crown jewel Tonhalle Orchester’s resident hall Tonhalle was closed in 2017 for a three-year refurbishment where a new organ manufactured by Orgelbau Kuhn will be added, the orchestra came to Tonhalle Maag for rescue. Built from a former factory in the west Zürich industrial zone, Tonhalle Maag (Maag Concert Hall) from outside is everything a concert hall is not and looks exactly the way how a factory resembles: austere, rigid, and philistine. Inside, the shoebox-shaped hall neatly seats over 1,200. As a temporary temple for Zürich’s vibrant classical music scene, Tonhalle Maag, named after the gearwheel factory whose building still stands, took only seven months to build and opened on September 30th 2017 when the orchestra inaugurated its 2017-18 season. Now just half way into its first season, the hall has already featured Maurizio Pollini, jazz bands and marked the Lunar New Year with a touring Chinese orchestra.

Tonhalle Maag in 7 months and 4 minutes 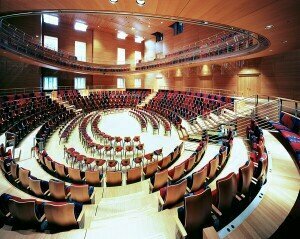 At first glance, a factory where assembly lines making industrial commodities seems the antipode of a concert hall that celebrates creativity and subtlety. Yet its tremendous space or sheer volume of its warehouse have made them convenient incubators for concert halls. The Pierre Boulez Saal in Berlin is a fine example of how the former Staatsoper Unter den Linden’s depot was converted into a salle modulable envisioned by the composer Pierre Boulez. Designed by architect Frank Gehry and star acoustician Yasuhisa Toyota, the chamber music hall is a tribute to Pierre Boulez from Daniel Barenboim.

Then there is of course the much-talked-about Elbphilharmonie Laeiszhalle Hamburg, a former warehouse that has changed the skyline, uplifted the cultural landscape as well as the housing price of Hamburg forever.

Yet almost 5,000 miles away in west China, a transformation took place that few have heard of. In July 2017 the Chongqing Philharmonic Factory（重慶愛樂工廠） opened its door and staged the first concert. The four-storied hilltop hall was converted from an obsolete automobile parts factory and took ten months to finish. Characterized by its green benches instead of comfortable seats, the hall is intended to be a community cultural hub by its resident orchestra Chongqing Philharmonic. It houses a chamber music hall, a studio, a training facility, a café as well as an adjoining jazz bar.

Chongqing might be the last stronghold in China before pragmatism is defeated when it comes to hall design. As the article goes, it becomes inevitable to take a brief survey as new venues keep emerging from the mystic middle Kingdom. The biggest of them is arguably the Jiangsu Centre for the Performing Arts（江蘇大劇院）.

Located in Nanjing, the provincial capital of Jiangsu province, JSCPA is the most ambitious undertaking of the province to regain its artistic leadership as it has achieved economically. Occupying an area as big as the New York JFK Airport, its five ultra-modern halls boast a total seating capacity of up to 7,500, equal to a full size stadium. During its opening season in October 2017, the highest ticket price of Anna Netrebko’s recital easily doubled any previous records. In its huge canteen trays are returned from a carousel and meals are charged by chips underneath the bowls, both made possible with state-of-the-art technology.

Nanjing is joined by a league of other Chinese cities where new performing venues welcomed its first guests in 2017, some of them eager to be recognized as UNESCO City of Music. They illustrate the insatiable appetite of the government or real estate developers to build halls for their people. But the most challenging part is always how to fill the halls.

New venues opened in China in 2017