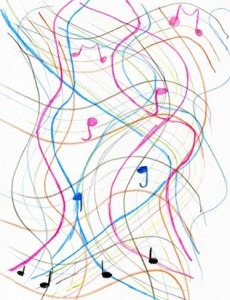 Synaesthesia is a physiological ‘condition’ which literally means “a fusion of the senses”. Its incidence is considered to be about one in every two thousand people, though it may be far commoner, and it is more common in women than in men.

Musical synaesthesia is “one of the most common [forms], and perhaps the most dramatic” (Oliver Sacks). It is not known whether it is more common in musicians or musical people, but musicians are more likely to be aware of it. I have always had it, and from quite an early age, I was aware that my brain assigned individual colours to the musical keys (also for letters of the alphabet, days of the week, months of the year, and numbers). It seemed perfectly normal to me. I have met other synaesthetes, including those who share my particular version of the condition, “grapheme-colour synaesthesia”, though our ‘colour schemes’ are never identical. My particular colour scheme is unchanging: A is always red, no matter what background it is set against or in what context; F major is always a dusky mauve.

As a musician, this makes for an interesting experience. At concerts, even if I do not know what key the piece is in, the music will conjure up colours in my head. And when I am playing music, the score is most definitely not black and white: chromatic passages, in particular, are extremely vivid and colourful. When I am working, I do not add my synaesthetic colours to the score – this would only add to all the other annotations that are scribbled on my music. But I am always aware of the colour scheme as I am working, and it definitely informs my practising.

Some facts about synaesthesia:

• The most common form of synaesthesia is the experience of colours linked to letters and numbers (‘grapheme-colour’ synaesthesia), which is what I have.

• Synaesthesia is involuntary and automatic

• Synaesthesia is believed to be due to cross-activation within areas of the brain, and is probably hereditary

• The occurrence of synaesthesia is higher in women than in men

• Synaesthetes are not mad! Nor is true synaesthesia a form of hallucination (though the drug LSD can induce temporary synaesthesia): for each synaesthete, their particular experience is unchanging.

Aristotle wrote that the harmony of colours was like the harmony of sounds. This set the stage for a later connecting of specific light and sound frequencies, as Aristotle’s works were translated and incorporated into European scientific study. From the late 15th century, academics, scientists (including Isaac Newton) and musicians were assigning colour schemes to notation, intervals, and the musical scale. Musicians who were genuine synaesthetes include Franz Liszt, American pianist and composer, Amy Beach (1867-1944), who had both perfect pitch and a set of personal colours for musical keys, Rimsky-Korsakov, and Olivier Messiaen. Scriabin claimed to have synaesthesia, but it is more likely that he was simply responding to the then salon fashion for “colour music”, and the writings of Russian mystic Madame Blavatsky, founder of the Theosophical Society. Founder of the Futurist movement in art, Marinetti, aspired to have all the senses (he counted five) employed in “interactive synesthetic ecstasy”, and The Futurist Manifesto includes suggestions as to how colours, shapes and sounds combine, which has influenced composers and musicians, as well as artists. English composer Sir Arthur Bliss wrote a Colour Symphony, but this is not the product of a synaesthetic mind. Like Scriabin, he was influenced by the idea of “colour music”, though it was not a mystic association for him but rather a response to the symbolism usually associated with the colours of the English heraldic tradition.

Amy Beach
Romance for Violin & Piano Op 23
Messiaen’s music, for me, vibrates with colour. It is full of rich layers of colours stacked atop one another, flashes of bright gold, orange, royal blue, deep red. Combinations of colours were very important in his compositional process. “I see colours when I hear sounds, but I don’t see colours with my eyes. I see colours intellectually, in my head.” He found that raising a note an octave produced a paler shade of the same colour, while lowering the note produced a darker hue. Only if the pitch altered would the colour change (my experience is identical). His colour associations were very consistent (as mine are), and so to help musicians understand his particular colour schemes, he annotated his scores with the precise colours he perceived. The piano part, in the second movement of his extraordinary and moving Quartet for the End of Time, written in a German PoW camp in 1940-41, contains the instruction to aim for “blue-orange” chords, a difficult concept for a non-synaesthete to grasp, perhaps.

Olivier Messiaen
Quartet for the End of Time
II. Vocalise, pour l’Ange qui annonce la fin du Temps (Vocalise, for the Angel Announcing the End of Time)
Rimsky-Korsakov’s colour scheme follows, one of several I could have included. My colours are in brackets. As a general rule, minor keys are a more muted version of their major counterparts. Enharmonic keys are different, however: while D-flat major is a pale greeny-blue, C-sharp major is deep red; F-sharp major is purple, which G-flat major is a pale yellow-orange.