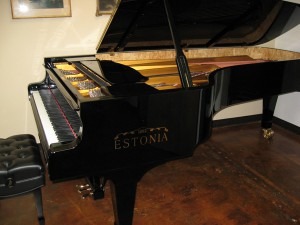 For the average citizen of the Soviet Union, anything with the exception of plain breads, cabbage, potatoes and vodka was a luxury item. Soviet leadership, however, did produce a number of cultish consumer items of frequently questionable quality. A reflector electrical heater, a kind of miniature satellite dish with unprotected filament was not very effective in warming up a room. However, it was unbeatable in starting home fires! Waiting time for a fridge was 6 months, a car could be ordered 10 years ahead of completion, and if you wanted to reserve an apartment for the children of your children’s children, you probably didn’t hand in the form in time. On the musical stage there was the famous “Tonika,” the first electric guitar mass-produced in the USSR. It had an oddly amorphous body shape, was almost too heavy to actually lift off the ground, and because of its enormously thick neck was basically unplayable! All very charming indeed, as long as you did not have to live with it!

In some parts of the Soviet Empire, however, quality products had been fashioned since before the revolution. Estonia, for one, had been producing quality pianos since 1779. Johann Friedrich Grabner—originally from the city of Bremen—set up his shop in Tallinn and produced “clavichords, harpsichords, fortepianos, upright pianos, positive and portable organs, harps and lutes.” With trade and competition steadily growing, the late 19th and early 20th century saw nearly 20 independent piano companies operating in the region. But it was the highly talented craftsman Ernst Hiis, who made Estonian pianos a household name. His first hand crafted instrument emerged in 1893, and he founded his own company named EA Ihse in 1903. Hiis never made pianos under his own name, yet his instruments quickly received awards for excellence in design and manufacturing at a number of international competitions in Europe.

The Second World War brought piano manufacturing in Estonia to a complete stop. With most factories destroyed, it took Hiis until 1950 to reestablish a manufacturing base. And on 6 September 1950, Joseph Stalin gave the order to turn part of the People’s Furniture Factory into a piano factory. Appropriately named the Tallinn Piano Factory, it produced a new grand piano named “Estonia.” By 1953, the first medium-sized grand piano rolled off the production line, and the instrument was awarded a silver medal at the World Exhibition in Brussels. Over time, roughly 7400 Concert Grand instruments have been produced, and a number of great pianists, such as Sviatoslav Richter, Dmitry Shostakovitch, Emil Gilels, Van Cliburn, Oskar Peters and Claudio Arrau, have performed on the Estonia. Daniel Pollack wrote in 1961, “I would like to take this opportunity to tell you how pleased I was to play the Estonia concert piano. It is indeed a wonderful instrument and has a lovely tone, which is the most important quality for any instrument.”

Ernst Hiis died in 1964, and the quality of the instrument gradually declined to approximate the unplayable category of the “Tonika.” When the country regained independence in 1991, however, the instruments were redesigned. In consultation with leading piano expert, hundreds of changes and technical advancements were implemented in all piano models, and a couple of new models introduced. Improving the sound, performance, appearance and durability, the “Estonia” is once again an instrument of the highest quality. Combining traditional European craftsmanship and the highest quality components and materials, the “Estonia” produces a singing, warm and romantic tone. The majority of “Estonia” piano are currently sold in the United States, and the instruments have gained recognition throughout the world. The Estonian conductor Neeme Järvi knowingly calls the instrument “one of the best-kept secrets in piano making today.”