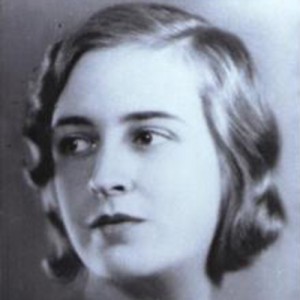 Luise von Sonnenthal (1900-1962) was born into a dynasty of ennobled actors. Her grandfather Adolf Ritter von Sonnenthal was not only Vienna’s most popular classical actor and matinee idol at the Burgtheater, he was also one of the first Jewish individual to be elevated to knighthood by Emperor Franz Joseph. Her sister Susanne von Sonnenthal was in the arts business, and her sister Helene was a member of the celebrated Max Reinhardt ensemble. “Luzi,” as she would later call herself, appeared in a couple of racy films and was by all accounts, a seriously gifted pianist. Apparently, her “Chopin playing is of a remarkable high order with fluid, clearly articulated technique, rhythmic discipline and rapid, even passage playing.” In 1917, the teenage musical genius Erich Wolfgang Korngold was invited to a dinner party with his close friend Rudi Duschnitz, a distant relative of Luise von Sonnenthal. Their initial meeting was brief, but Luzi wrote in her memoirs that she “felt a connection to Erich that first time they met.” They met again at a concert later that year, and a long and difficult courtship ensued. 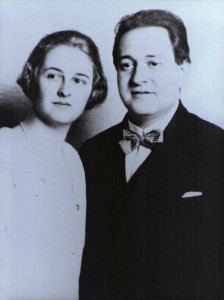 Korngold and Luzi on their wedding day

Erich Wolfgang Korngold has been born into a highly ambitious household, and his father Julius Korngold was regarded as the top music critic in Vienna in the early twentieth century. He championed the works of Gustav Mahler and “mercilessly exploited his son’s talent in order to realize his own ambitions.” In his memoirs Julius writes “I did not allow my son to leave the house by himself until he was nineteen,” while Luzi’s writings clarify that the infatuated Erich would find imaginative ways to escape the parental home as often as possible. Julius hated Luzi’s presence from the very first moment, and fought the relationship tooth and nail. However, Luzi’s parents weren’t particularly keen on the relationship either, and demanded, “that the young lovers would endure a year of separation before making further commitments.” This enormous emotional stress impelled Korngold to embark on his most ambitious work. Das Wunder der Heliane, dedicated to Luzi, which essentially celebrates the death-defying power of love. 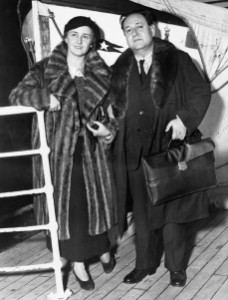 Defying all obstacles and turmoil, Erich and Luzi were married on 30 April 1924. In order to gain financial and emotional independence, Erich had needed to escape the dominance of his father. And that meant entering the world of popular operetta arrangements to earn a living, a decision that further increased the gulf between Julius and Luzi. Erich’s parents openly expressed their disapproval, and despite Luzi’s best efforts, they remained distant and critical. Since Erich’s mother took over the running of the household and meticulously planned their daily lives, Luzi became Erich’s assistant. She proofread and corrected his music and would rehearse singers in many of Erich’s works. In the meantime, Julius had managed to antagonize much of the Viennese musical establishment, necessitating for Erich to stay clear of serious compositions. Although Erich and Luzi were able to purchase a villa in a Vienna suburb, Julius and his wife Josefine continued to be an integral part of the household. Luzi gave birth to two sons, and Erich composed the Baby Serenade. Apparently there is still some debate whether it was written for the first-born Ernst, or the second son Georg.

Julius Korngold always saw his son as the natural successor to Gustav Mahler. He was appalled that “neither Erich nor the rest of the world appeared to agree with him, and was profoundly disturbed that Erich spent so much of his creative energy on lightweight populist music.” It was Erich’s growing professional relationship with Max Reinhardt that paved the way for the Korngolds to arrive in Hollywood. Luzi and Erich became close friends with the Schoenbergs, and Erich eventually secured contracts from Paramount Pictures and Warner Brothers. Luzi reports that Erich “fitted his music to the running film just as he would accompany a singer on the opera stage,” but she was eager for him to be restored to his “earlier reputation as a “great composer.” After the war, both Erich and Luzi greatly missed Vienna and returned to Europe, but the city of old no longer existed. In the aftermath of his near fatal heart attack in 1947, Erich wrote his Symphonic Serenade and dedicated the work to “Luzi, his beloved wife and best friend.” Luzi, in turn, authored a biography of her husband, and died in 1962 of heart failure.