Widely considered the most influential cartoonists of all time, Charles Schulz (1922-2000) created the “Peanuts” in 1950. This most famous of all comic strips ran for 50 years, with 17,897 original strips published in all. It appeared in over 2,600 newspapers and was translated into 21 languages. “Peanuts” focuses entirely on a social circle of young children, and its “humor is psychologically complex and driven by the interactions and relationships of the characters.” The main character in the series is Charlie Brown, a meek and nervous young boy who is a constant failure. However, the most recognizable character for musicians is Schroeder, who appears in the comic strips playing music on his toy piano. 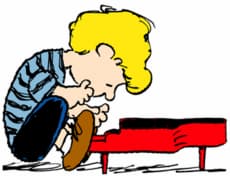 He is a rather innocent boy, but he is certainly fanatic about Beethoven. Schulz loved classical music, and he became aware of composer Ellen Taaffe Zwilich in 1990. Having his finger squarely on the pulse of his time Schulz incorporated Zwilich into a “Peanuts” strip. At a concert Marcie observes that the next piece on the program, a concerto for flute and orchestra, is by Ellen Zwilich, who “just happens to be a woman.” Peppermint Patty stands on her seat and exclaims “Good going, Ellen!” Zwilich responded by composing her Peanuts Gallery for Piano and Orchestra in 1996. In six movements dedicated to Schulz, Zwilich “offers her musical portraits of the Peanuts characters.” 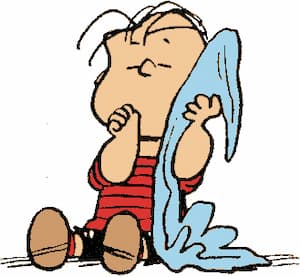 “Schroeder’s Beethoven Fantasy” quotes the opening motive in Beethoven’s Hammerklavier Sonata, Op. 106, which Zwilich recalls seeing in the balloon above Schroeder’s piano in more than one Peanuts strip. The composer described this movement as “Schroeder improvising a fantasy on the opening of a late work by his favorite composer.” Linus, younger brother of Lucy, offers “intellectual, spiritual and reflective elements, sharing his opinions on literature, art, science, politics and theology.” Linus finds security from sucking his thumb, and he is always holding a blanket for comfort. In fact, Schulz called it his “security blanket,” a term that subsequently entered the dictionary. Linus and his security blanket are the focus of Zwilich’s second movement. She writes, “since he always looks ready for a nap, I wrote a lullaby.” 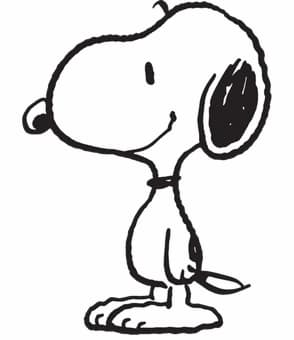 Snoopy the dog, officially described as a beagle, behaves like a real dog but communicated to the readers through human thoughts. Schulz wrote, “his character is a mixture of innocence and egotism; he possesses childlike joy while on occasion being somewhat selfish.” Snoopy is dependent on humans, and his various alter egos include a world-famous attorney, surgeon or secret agent. Because Snoopy is frequently dancing in the comic strip, Zwilich decided to follow suit. She picked the samba, because it is both “hot and cool, sophisticated, and a lot of fun.” 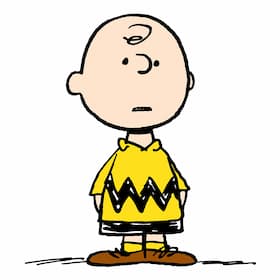 Charlie Brown is the main character, and he is described as “decent, considerate, and reflective, but also as awkward, and deeply sensitive.” Above all, Charlie Brown is a constant failure. Nevertheless, he is determined in the face of certainly failure, and experiences pain and anguish through self-pity. A critic wrote, “What makes Charlie Brown such a rich character is that he’s not purely a loser. The self-loathing that causes him so much anguish is decidedly not self-effacement. Charlie Brown is optimistic enough to think he can earn a sense of self-worth.” There has been much speculation as to whether the Charlie Brown character was actually based on Charles Schulz himself. Schulz would only say that he hoped that “we recognize some of ourselves in Charlie Brown since we are far more acquainted with losing than with winning. “Charlie Brown’s Lament,” according to Zwilich, “is not a terrible sad one but an acknowledgement of the times when we want to say good grief.”

Charlie Brown’s nemesis is called Lucy, and she is bossy, selfish and opinionated. Schulz described her character as “full of misdirected confidence, but having the virtue of being capable of cutting right down to the truth.” At times, Lucy charges money for psychiatric advice to other characters, usually Charlie Brown. While Schulz often focuses on her inner violence, Zwilich musically accentuates her sweetness that quickly boils over into anger.

The work ends with a procession of characters led by Marcie and Peppermint Patty, all marching in single file. Can you hear how Lucy musically once again interrupts Charlie Brown? 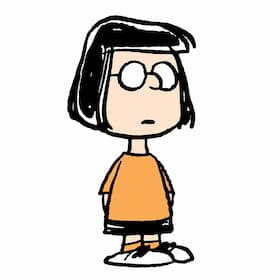 Schulz and Zwilich had the highest admiration for each other. He admired how she was able “to create complex and beautiful music on her blank page,” and she felt that he “had created characters she knew personally.” Schultz published a strip in March 1997 in which he specifically makes reference to Zwilich’s Peanuts Gallery. When Schroeder plays the piano, Schultz does not quote Beethoven but a melody by Zwilich. Tellingly, in the ensuing dialogue Lucy complains that her part in Zwilich’s composition “should be longer.” 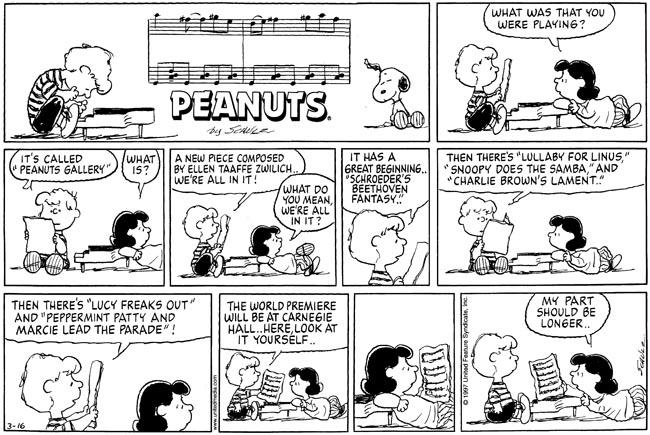