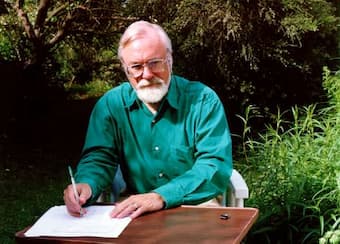 Monica McCabe, thank you so much for talking to me today about the piano music of your husband. I first met John McCabe and you in 2005; now, after his death in 2015, it is an honour to give a World Premiere of one of his piano works. Landscape: Hills Near Jerusalem for piano was written in 1978 so can you explain how this beautiful piece lay unpublished for so many years?

Landscape was in fact not originally intended for publication and started life as a birthday gift for our friend, the teacher, theorist and curator Irit Rogoff who is currently Professor of Visual Cultures at Goldsmiths, University of London. John gave the piece to Irit, but he also kept a manuscript copy for himself, which I found in his archive after his death. Another friend, Paul Adrian Rooke (who sadly died in 2019) typeset it and then I asked Novello (Wise Music) if they were interested in publishing it. I am delighted you are giving its first public performance – thank you for doing this!

The work is dedicated “For Irit Rogoff on her birthday”. What is the story behind this dedication?

Irit was instrumental in arranging the commissioning of John’s Piano Concerto No. 3 (“Dialogues”), which was premiered by her husband, the pianist Ilan Rogoff. As for that piece, I am not sure if it was one of John’s most successful works: it is immensely long, and I think John might have had just too many ideas! Landscape is at the other end of the spectrum – just a few minutes long – but has some monumental features, like the hills of Jerusalem that it seeks to evoke. 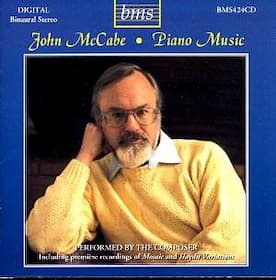 Did John write many pieces for other people and/or special occasions?

Yes, it was not an unusual thing for John to give a little piece as a gift, and there are a number of pieces, including short works for Richard Rodney Bennett and to celebrate the wedding of composer David Matthews. There is also a piece for treble recorder and piano called Domestic Life, which was written for the 60th birthday of John Turner’s wife, Margaret, and which was later orchestrated and recorded. John was also fortunate to have works written, including a set of pieces by different composers for his 70th birthday, called Haydn Fantasies – appropriate as John was known partly for his interpretations of Haydn’s music.

Other pieces by John McCabe bear the name Landscape. Did topography or even specific places inspire John’s music?

There are two sets of “Landscape” pieces, including a Deserts series and a Rainforest series. Also a number of works relate to the Lake District, to which John was greatly attached. He was very sensitive to landscape, which includes city scapes. But Desert III: Landscape is I think the only other one actually called Landscape. I requested John’s subtitle “Hills Near Jerusalem” to differentiate between the two works. Desert III is for piano trio.


John wrote a lot for piano being himself a distinguished pianist. Can you describe the place the instrument held in his life, and what perspective do you think being a pianist gave him in terms of composing?

John learned the piano from a very early age, studying with first of all a pupil of the great piano teacher Gordon Green (Stephen Hough, Christian Blackshaw, Martino Tirimo, and John Ogdon were among his students). John never wished to be a conductor, as composers tend to do. He always wanted the music at his fingertips. On the other hand, he never composed at the piano, because he felt that the music he composed then would be influenced by pianistic considerations. He always composed in the abstract, and would not even play the work on the piano until a work was more or less complete in his mind.

Are there any other unpublished works, for piano or anything else, by John McCabe?

Yes, there are still a few very early works dating from the 1950s. He wrote what he called “a rather gloomy Passacaglia” for two pianos in 1957, of which I have the manuscript, which is notable as it demonstrates his very early interest in passacaglia and variation form. 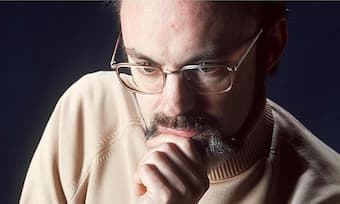 Did you yourself have a role to play in John’s professional work, and how would you describe your ongoing role now that John’s output is complete?

Yes, since I come from the recording world I set up some of John’s earliest recordings as a pianist, including an early Haydn LP and the complete works of Nielsen, which I placed with HMV and Decca respectively. I then approached Decca about doing a complete Haydn piano sonata series, and they took this idea on board as they were doing many complete Haydn series at the time. And the work continues (much held up by the pandemic): I have now written John’s biography – still on computer at present – and am working on his archive.

Do you have any particular favourite works by your late husband, and are there any works you’d like to be performed more often?

Certainly – too many to mention! Amongst my favourite are the Cello Concerto Songline (2007) and the Symphonies, particularly numbers 2, 3, 4, 6 and 7. There are some ballets – Edward II and the two Arthur ballets, especially Part I, which has a suite derived from it. There are works for brass band, too: Cloudcatcher Fells (1985) and The Maunsell Forts (2001/02). The piano works I most admire are probably the studies Evening Harmonies (Hommage à Dukas) (2000) and Snowfall in Winter (Hommage à Debussy) (2003). If any pianists want a challenge, the toughest is Tenebrae, a 20-minute long work that was give its first performance in 1994 by Barry Douglas at the Harrogate Festival.


A leading performer for over twenty years, Matthew Schellhorn regularly appears at major venues and festivals throughout the UK and has recorded numerous critically acclaimed albums. Described as a pianist of “searching intelligence and magnificent technique”, he has a distinctive profile displaying consistent artistic integrity and a commitment to bringing new music to a wider audience. In addition to his work on the concert platform, Matthew Schellhorn is a passionate educator and communicator, giving regular masterclasses and workshops in the UK and abroad.He has visited many university music departments and conservatoires to talk about his work in a wide range of performance contexts, including performance practice, commissioning and interpreting new works, working with today’s composers and bringing out fresh ideas in the interpretation of well known repertoire. He maintains a private teaching practice from his home in London. www.matthewschellhorn.com