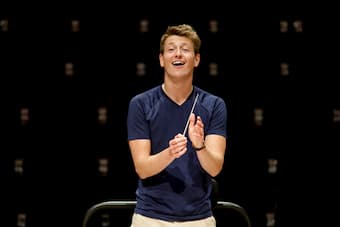 With performances from Moscow to Newcastle, Dresden to Geneva, young British conductor and composer Duncan Ward has had a very busy year, given the current circumstances. As 2020 draws to a close, I catch up with him and hear his thoughts on working through the pandemic.

Duncan is based in Cologne, having travelled throughout Europe this year (when conditions have allowed) to conduct ensembles including the London Symphony Orchestra, Staatskapelle Dresden and the Royal Northern Sinfonia. ‘At the moment I’m really so grateful for every chance to make music with musicians,’ he says. ‘With an audience – even better,’ he adds, although this of course has sometimes been far from reality.

I’m curious to know if live-streaming a concert to an empty hall changes the energy in the room, or how Duncan prepares and performs.

‘I think as long as you know what it’s going to be, you manage your expectations,’ he explains, ‘but certainly in my experience any number of audience is better than none.’ 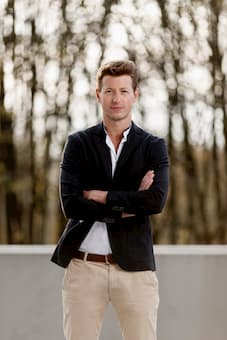 Thinking back to a concert he gave with just 200 people socially distanced in a 2000-capacity opera house in Dresden this summer, Duncan mentioned that ‘it wasn’t that you walked out on stage hoping that it was full. Quite the contrary: you knew that the people who were there really wanted to be there, you really felt their intense energy listening. Everybody there was really enjoying it and so grateful, and that does help the live energy. With that said, so many of the orchestras are getting so good now at the streaming-to-an-empty-hall thing’ – reassuring news given the prolonged uncertainty of the situation live performers find themselves in.

Some musical styles lend themselves better than others to a covid-friendly setup – a recent Gershwin programme, with the drumkit hopelessly far from the bass section, proved a notable challenge. I ask if having to deal with these additional practical considerations influences the way Duncan approaches rehearsals.

‘Always as a conductor part of your job is very quickly adapting to the circumstances or atmosphere or the room or whatever, working out the best way to work, but that was quite extreme,’ he says.

And does this ever get in the way of the music making?

‘Of course to an extent it gets in the way, and it depends on the morale of the group. If there’s enough of a collective – and of course it’s part of my job to create that atmosphere – [a] feeling of “this is really difficult but we have to make it work and we’re so happy to be playing anyway and we mustn’t let our musical standards be any less than they normally are,” then that’s fantastic.’ 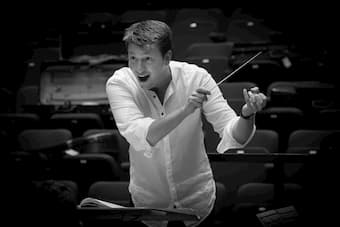 It’s part and parcel of the life of conductors to be constantly juggling and balancing their vision of a piece with what (and who) they find themselves in front of at any given time. I ask Duncan about achieving the balance of his interpretation of a piece with other ideas the musicians might have.

Speaking of a normal symphonic work, where some of the decision-making isn’t diluted by a soloist, Duncan states that ‘definitely it’s important to arrive with a very strong vision of how you dream it goes. Then, the total joy of the job is responding to what the people in front of you give you.

‘In the very best places, it’s that exchange of music making that can lead to the very best performances: you’ve already come with a strong idea, but they play in a certain way or certain style that excites you and gives you even more energy and impetus to play with. […] Ultimately you all have to arrive at one interpretation of the piece, and if all the ideas and work need to come from me (in some places nobody gives anything back other than doing what you say) then fine, but of course certain players are very active and musical and natural and automatically do things like you, and you trust their music making.’

Duncan’s first conducting gig came along earlier perhaps than most – at the age of 12 he composed and conducted a musical at school based on Alice in Wonderland. He didn’t have any guidance on how to do it – he just followed his instinct, and even now, although his technique may have improved somewhat, instinct still plays a large part in Duncan’s approach.

‘A lot of [the] technique stuff came early on before I was in front of a professional group,’ he explains, ‘and I also had a bit of a background in dance, and that meant that physically I was used to expressing music through my body – that was what I had always done, and I think that did help a lot, actually. It meant that I could translate my musical thoughts very quickly into gesture rather than words.’ 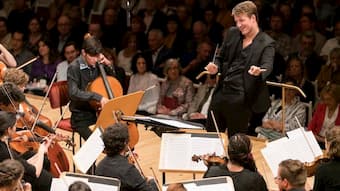 Speaking of structuring a rehearsal in challenging circumstances, he says ‘If anybody’s going to keep control of the situation and calmly sort it out it doesn’t help to get panicky or angry or anything like that.’ When faced with a rocky project with an uncertain outcome, ‘I’m told that I always remain unbelievably calm,’ Duncan laughs. ‘I think that’s important.’

‘The calculation is about what needs to be done work-wise to make it happen. […] Sometimes big broad strokes of playing through massive chunks to just get a first picture of [a piece] is great, sometimes that’s a complete waste of time. If it’s already a disaster, why waste an hour going through that whole thing when actually if you sift a few things stylistically or technically or musically […] then you haven’t wasted that precious time? And let’s face it: it’s often a race against the clock, and you have to be extremely efficient and wise about rehearsal time. That’s one of the quickest ways to annoy an ensemble: either you’re wasting their time by being too pedantic when you could just trust them that it’s going to be better tomorrow, or that you’re really not sussing out how to solve things and what needs to be worked on.’

This sixth sense certainly comes with experience, but the rewards for Duncan are the most satisfying of all. When conductor and ensemble are tuned in to each other, ‘it becomes like making chamber music, and that for me is the most rewarding.

‘I’m not someone who’s going to say “it absolutely has to be like this” – I love it when it’s a collective music making experience and people feel like they can have a voice within that. Ultimately, I want every single musician to play the best that they possibly can, and to do that they need to feel a sense of responsibility and inspiration.’