From Bach to Breakdancing

Dominique Vleeshouwers is a musical powerhouse. The Dutch percussionist also turns his hand to producing, composing, curating and creating, and has earned a reputation for performances that are electrifyingly exciting and deeply thought-provoking.

From an installation on child soldier while he was still studying to his most recent project A new dawn: for new tomorrows scheduled for March 2022, Dominique’s thoughtful and curious approach to performance crosses boundaries and art forms, and I chat to him from his studio in Amsterdam about everything from Bach to Breakdancing. 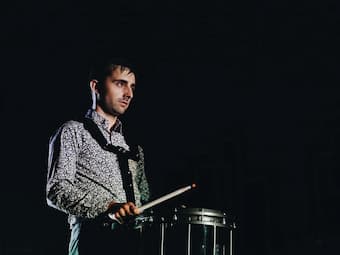 In the south of the Netherlands we have this huge wind band culture, and when I was very young we would go to these concerts. As soon as I saw the drummer and percussionists I went to the back and said, ‘I want to do this.’

I formed an ensemble of clarinet, violin, cello and marimba for my second year [conservatoire] chamber music exam, and I started to arrange my own music. We made a programme around Jewish music – they said, ‘Your exam is at 2,’ and I said, ‘No, it’s at 7 in this hall, we already booked it, see you there.’

After the exam we sold that programme for two years to other venues, and I guess I was already thinking about making themes on concerts and approaching organisations to see if they would be interested in having us play there. That was my first group and first time making a programme that started selling, and from there that just started developing.

I worked with The Ruggeds, a breakdance crew from the Netherlands two years ago, and I had some lessons from them in breakdancing, to feel what it’s like to stand on your head, to physically feel how tough what they’re doing is. It helped, because as a musician, if I thought that [when performing] it would’ve been musically nice to push something further, I knew it wasn’t possible because they would have literally passed out. I think it’s good to step in their shoes and to know a little bit, 0.001% of what they do – it’s enough to make a connection. 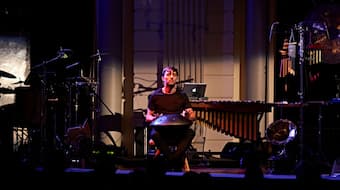 Which composers / genres / styles do you feel the most comfortable with?

I’m super grateful for what I learned in school, and I really feel like with any piece you put in front of me I can study and I can do it, I think. It’s super interesting to work on the concertos of these great composers like MacMillan or Péter Eötvös, these pieces are interesting to study and dig in and to learn what their worlds are about, but we don’t have that many of these great composers who have written for us yet, so it’s also kind of natural to start looking for new music, working with composers but maybe also starting to explore sound worlds myself.

I feel like I’m looking for what my own musical voice is, my own musical language. I think it’s somewhere between contemporary composed music with a modern sound world, basically.

It doesn’t feel like my voice to, for example, play Bach on the marimba, or on the vibraphone. If I think about the composition, maybe it works better on a violin or a cello, so shouldn’t we leave it there and make something new that represents the modern times that we live in now? 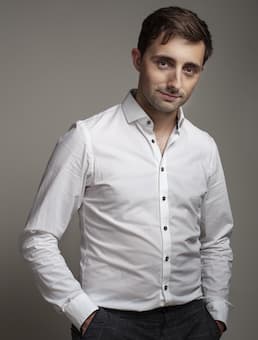 In the summer for the first time I’m going to do this piece called Speaking Drums by Péter Eötvös, which I’m very excited about. He’s a brilliant composer, a bit like Mozart, very playful, I think he’s really interesting. There’s also a piece that I also want to do so much which isn’t planned yet, a piece by Kalevi Aho called Sieidi. I think he’s also one of the brilliant composers of our time. Those two are definitely on my list.

I find joy in hanging out with friends, that’s something I really love. I recently discovered the world of wine, and met a lot of winemakers and think that they’re similar to musicians and artists.

I think I have many interests and one thing I hate is to be bored. I always tend to look for something else or for a new challenge, so I find my inspiration there.

It’s also good sometimes to just take a walk and not have any worries. I’ve started to learn that more, to let things go. I was someone who always had to follow the plan, and now it’s like, ok, I make a plan and it goes this way, and apparently it was supposed to go like that!