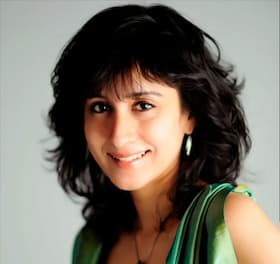 Conceived of and finished during the global COVID-19 pandemic, The Planets and Humanity is Sri-Lankan–British composer Tanya Ekanayaka’s reflections on ancient music in a modern world.

She says ‘I see a uniquely powerful and delicate congruence between ancient music which predates and forms the antecedent to the numerous musical genres of today’s world and genres to be, on the one hand, and the unfathomable infinity of the universe within which is arguably contained all existence, past, present and future. The prevailing continuity of each may be seen to correspond to a deep connection between the elements comprising each and, in turn, project a conflation of time and space into an organic ‘moment’, as it were.’

Unlike Holst’s monumental orchestral work, this work for piano presents the planets in a random order, but each connected with a point on Earth.

She opens with Neptune, which she pairs with a melody of the Asháninka people of South America as a kind of tapestry of moods. The Asháninka live in the rainforests of Peru and their traditional cotton clothing of bright blue or brown is hand-woven. They have been known since Inca times and, as inhabitants of the rainforest are threatened by the exploiters of this vast resource in the modern world.


We go from the extreme outside of our solar system to the inner-most planet with Mercury. It is paired with Antarctica, our own inhospitable world. A calming movement, we can imagine that hidden within these two difficult worlds is a kind of tenderness.


The planet Uranus is paired with the Numbulwar people of Australia’s Northern Territory. This Aboriginal people were chosen to bring their dreamtime paintings to the idea of a distant fantasy world.


The second inner-most planet, Venus, is paired with the Sámi people of the Scandinavian peninsula, which includes the northern parts of Norway, Sweden, Finland and part of Russia. A traditional melody of the Sámi people is ‘trans-created’ with a reflection of Venus.


Inspired by the many rings of Saturn, this piece is made of 8 intertwining themes – 7 themes for the four groups of major and 3 groups of minor rings, and a final theme for the unknown parts of the planet itself. One theme comes from the Gond people of India. The Gond are one of the larger tribal groups of India and considered an indigenous people of the country. They have an estimated population of 13 million, living in central India.


Taking on a planet not touched by Holst, Earth is her next subject. Written during the COVID-19 pandemic, the work becomes a reflection of the life that fights back against the disease. She dedicated this work to ‘each and every human being enveloped by the Covid-19 global pandemic.’


Jupiter, the largest of the planets in our solar system, is paired with one of the largest of the North American First Nation peoples, the Cree. Inhabiting central and western Canada, in the area to the north and west of Lake Superior, were never a unified people but were groups linked by the Cree language.


The final planet is Mars, which Ekanayaka takes out of its traditional war-like guise and transforms into a curiously gentle work, paired with the Hadzabe people of Tanzania, who have lived in the same location in the Rift Valley and Serengeti plain for thousands of years.


The isolation of lockdown during the COVID-19 pandemic touched everyone. In Ekanayaka’s work, she seeks to touch all parts of the world, reaching out to all the continents to find an element to weave into her work. We will always miss Pluto, but her inclusion of Earth is a major reconception of the place of all planets in music.