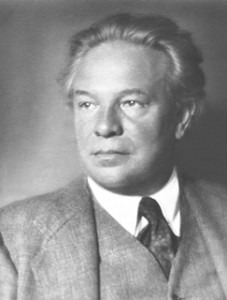 In Ottorino Respighi’s 1923 comic opera Belfagor, the eponymous devil comes to a small village in Italy. This was Respighi’s fifth attempt at opera and we see him still struggling to get the correct coordination between the music and the libretto. His found earlier operas, the student work Re Enzo (1905), Semirâma (1909), and Marie Victoire (completed in 1913, but not produced until 2004), were not successful and even his most successful opera up to this point, La bella dormente nel bosco (1922), a version of Sleeping Beauty, went through significant revisions in its early years. His 8th opera, La Fiamma (1934) saw his first truly successful opera.

Belfagor, in the guise of a researcher from the underworld, tells the apothecary Mirocleto that he’s been told that marriage is hell itself and he is there to marry someone and spend 10 years with her to test the truth of the statement. And, by the way, Belfagor is wealthy and Mirocleto has 3 daughters of marriageable age. Fedelia and Maddalena are entranced by the handsome and rich Belfagor (now appearing under the name Ipsilonne) but it is the youngest daughter, Candida, who he wants. Mirocleto and his wife consent to the marriage but, as in all operas, Candida is in love with another, the sailor Baldo.

We can see from the cover to the score exactly why Belfagor in his original form was not to be desired: The claws! The tail! The patchy fur! The fur! 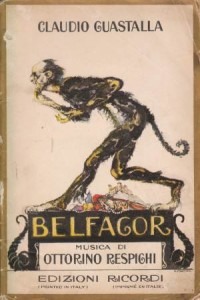 By Act II, Ipsilonne and Candida have been married a month, but the marriage remains unconsummated and Candida is finally able to flee with the help of Baldo.

In the last act, Belfagor appears again, and convinces Baldo that Candida did, in fact, lost her virginity with Ipsilonne, who has now disappeared. Candida appeals to the Virgin Mary for a miracle to show that she is speaking the truth and the bells of the church where she and Baldo have been sheltering begin to play.

The work received its premiere at La Scala, and was a success, but the critics, in the end, thought that the piece wasn’t funny enough to be a comedy and that the music overwhelmed the poor libretto.

In the end, Respighi created an overture for the opera (there wasn’t one in the original) that took on an independent life on the concert stage. He used themes from the opera in this new concert piece, beginning with Belfagor’s theme on the trumpet. The middle section comes from the love scene of the opera when Belfagor/Ipsilonne experiences human emotions for the first time. The bells at the end signify Candida’s purity.

Respighi: Belfagor Overture (BBC Philharmonic Orchestra; Edward Downes, cond.)
As an opera, the work has had few performances; as a concert overture, the work lives on.