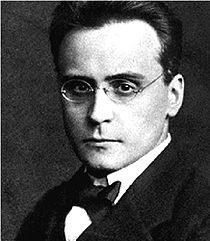 By now, even the dimmest bulbs on the planet know that smoking is bad for your health. And we also know that exposure to passive smoking, also identified as “second-hand smoke” or “environmental tobacco smoke” causes disease, disability, and death. Maybe that’s why Anton Webern, hoping not to disturb his sleeping grandchildren, stepped outside his house in Mittersill, Austria in the evening of 15 September 1945. He barely managed to enjoy a couple of draws on his cigar before he was shot and killed by an American Army soldier. Details of this fatal encounter had been sketchy until the musicologist Hans Moldenhauer, taking the US Army’s internal report into consideration, published the results of his investigation.

By September 1945, World War II had ended and Austrian territory was placed under Allied occupation. Serious food shortages among the civilian population led to severe malnutrition, and a lack of cleaning and sanitation supplies led to massive outbreaks of acute communicable diseases. It is hardly surprising that a thriving black market quickly developed. Benno Mattel, Anton Webern’s son in law, was not only a former member of the Waffen-SS (an armed wing of the Nazi Party), he was also smuggling goods. On the evening of the shooting, a major sting operation was underway at the Webern house, and Benno was arrested. Raymond Norwood Bell, a company cook from North Carolina participated in that operation, and when he felt threatened by the frail sixty-two year old composer smoking his cigar, fired three shots.

Moldenhauer’s account of the shooting has not been unanimously accepted. In fact, it has been severely criticized for portraying a sense of American callousness, with a Wild West mentality invading peaceful Austria and “depriving the victimized country of one of its cultural treasures.” In defense of Bell, one might mention that although major hostilities had ceased, Austria was clearly not a happy nor safe place. Armed bandits roamed the countryside, and not everybody had accepted the loss of the war. In addition, Austria was not a victim of Germany’s aggression, but had welcomed Adolf Hitler with open arms. Add to this that Raymond Bell was described as an overly nervous person and you have the perfect recipe for disaster.

But it would be equally absurd to suggest that American military personnel — as an extension of US foreign policy — were and are primarily concerned with the wellbeing of humanity. Just ask the civilian population of Hiroshima and Nagasaki! After all, the trigger-happy and intoxicated American yokel — self-righteously clinging to delusional notions of moral fortitude — has a definite place in the establishment of the American consciousness; and it clearly still resonates in American life today. And let’s not forget that Raymond Bell died of acute alcoholism in 1955. For all we know, he might already have been blitzed beyond Nirvana on that day in September 1945.

Upon hearing of Webern’s death, Igor Stravinsky said the musical world should mourn his passing and summed up both the nature and extent of his accomplishments as well as the insurmountable obstacles he faced: “Doomed to a total failure in a deaf world of ignorance and indifference he inexorably kept on cutting out his diamonds, his dazzling diamonds, the mines of which he had such a perfect knowledge.” And Arnold Schoenberg famously referred to Webern’s masterpiece of concision — the Six Bagatelles for String Quartet, Op. 9, as “a whole novel in a single sigh.” I think we all agree that smoking is a nasty habit, but in my humble opinion, it does not deserve the death penalty.