The Bavarian State Painting Collection has a painting from the late 17th century that just begs the question of where the artist got the inspiration for his work. The prolific Flemish artist David Teniers the Younger (1610-1690) was a contributor to the genre of the ‘monkey scene’ or ‘singerie’ where monkeys were given human attire and placed in familiar environments. We’re familiar with 17th-century Dutch paintings showing families at home or people drinking in bars. When the people are removed and monkeys substituted, however, the humour changes. We no longer have a record of a time and a place but rather a commentary on all the silly things we do – the folly of the world. 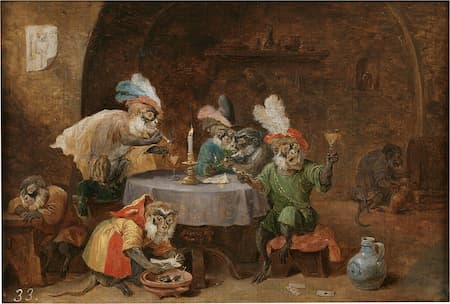 
From the left, a monkey is sleeping off his day, another is pulling paper out of a bowl, three monkeys are working with their pipes, and one with a feathered cap is singing, inspired by his drink. At the back a serving monkey brings them another serving of wine. The floor is scattered with cards. On the wall is a picture of the wise owl.

In another painting he shows monkeys encamped in a town. The monkeys sit in military tents and are well supplied with food and drink. One monkey, finely dressed in a pearl necklace, runs a butcher shop to supply the camp wand another draws a beaker of wine from a cask. In the background, one monkey plays a drum while another plays a trumpet, perhaps to get locals to sign up for the army. Again, the wise owl is shown over the tent door. 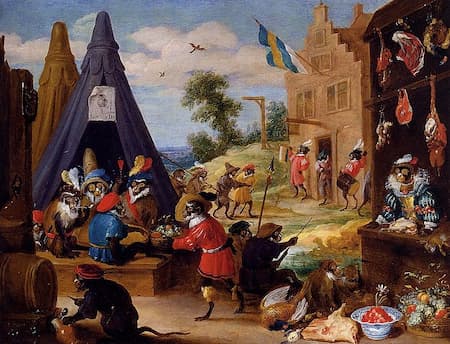 
The French painter Antoine Watteau, better known for his paintings of commedia dell’arte figures, also made a singerie: The Monkey Sculptor. Painted in his rococo style, Watteau has given us a monkey artist of great seriousness, with a statue that can’t bear to look at him. If humans do figurative sculpture to show the beauty of the human body, what can a monkey be doing? 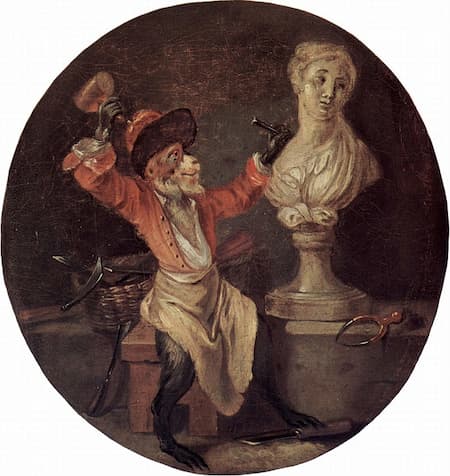 
David Teniers II’s brother Abraham also contributed to the singerie genre with his monkeys and cats in a barbershop scene. The monkeys are the barbers, and the cats are the customers, having their whiskers curled, or their beards shaved. 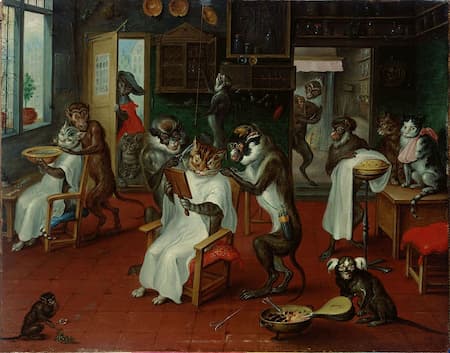 
If we return to David Teniers II, we find a painting that moves the monkey to the edge and pulls the cats forward to the centre of the scene. 3 cats and 2 kittens are gathered around a music book, while another cat looks in the window on the left. On the floor, are two monkeys in bright clothing. One plays a shawm while the other looks on. On the floor on the right are a bagpipe, a lute, a lute case, and another woodwind. On the floor is a partbook of music. On the backwall on the left a dancing-masters kit violin hangs on the wall. Seated on the cats’ book is the same owl we’ve seen drawn in other of David Teniers II’s monkey pictures. 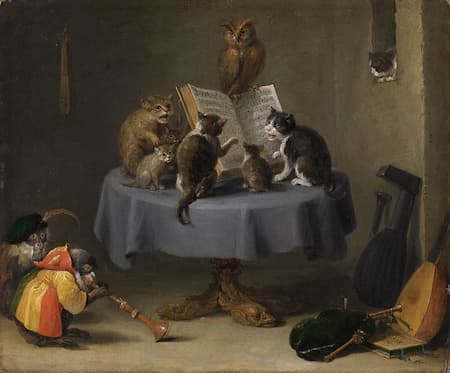