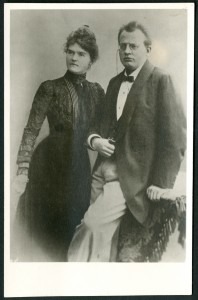 Love, it is said, knows no boundaries! Too bad somebody forgot to tell the Catholic and Protestant Churches! You see, the German composer Max Reger was Catholic and the light of his eyes, Elsa von Bercken, was not only divorced but also Protestant! When they decided to get married in 1902 nevertheless, the Catholic Church swiftly excommunicated Reger. As you might well imagine, the path to matrimony had also been rather difficult. In 1895, the young composer was struggling to make a name for himself, and he had a serious physical and mental breakdown. For one, he was in deep financial trouble and his relationship to his family, who worried that he had been lost to Protestantism, was becoming exceedingly strained. He spent an entire year in compulsory military service, and there was growing opposition to his music. Reger reacted violently with irrational outbursts, bouts of depression, and a descent into alcoholism. He barely made a living giving private lessons, and was known around town as “Schlamperl,” a highly derogatory term describing his unkempt appearance and the enormous boils on his neck and face. And it was in this general sad state of affairs that he met Elsa von Bagenski, who was married to the military officer Ernst von Bercken. Apparently, Elsa initially took singing lessons from Reger during a summer vacation. However, when Elsa divorced her husband—who had been seriously addicted to gambling—a couple of years later, Reger was all fire and flame. He courted her vigorously, asked her for her hand in marriage and even composed a number of love songs. Elsa, however, was in no mood to trade in a gambling addict for an alcoholic, and briskly told him to get lost.

Reger was devastated, and his parents urged him to return home. In the event of his refusal, they had already secured a place in the local mental health clinic for their son. On second try, Reger’s sister managed to take her brother home and within a couple of years, things started to decidedly look up. Reger had managed to gain control of his finances, and even more important, secured endorsements from the composer Richard Strauss and the organist Karl Straube. His works started to appear in concert halls around the country, and it was even suggested that Max Reger could be the future of music! In February 1902, Reger conducted a concert of his works in Munich, and to the surprise of everybody, Elsa had booked a seat in the first row. There was a bit of predictable chitchat after the performance, and Elsa indicated that she would accept correspondence from the aspiring composer. An intense exchange of letters soon followed, with Reger head over heels in love and Elsa, while showing interest, replying in a reserved manner. Predictably, Elsa had serious concerns whether Max was actually capable of staying away from the bottle. Furthermore, Reger’s extremely conservative catholic family flatly rejected any talk of marriage, and even the local priest turned up his nose. Not to be outdone, the Protestant church forbad any kind of religious ceremony, and when the couple finally decided to get hitched they had to rely on a justice of the peace. And thus it was decided that the happy occasion would take place on Elsa’s birthday, on 25 October 1902. And so it came to pass, with Reger’s excommunications announced shortly thereafter. During these trying times, Reger composed his Piano Quintet, Op. 64. Although Edvard Grieg compared the work to a “body without bones,” the composition nevertheless established Reger’s growing reputation as a trailblazer at the forefront of chamber music. Yet, trouble was once again not far away. More on that in our next episode.
Max Reger: Piano Quintet in C minor, Op. 64