Pioneering past and future

Accordion legend Richard Galliano is appearing with the City Chamber Orchestra of Hong Kong in June. We take a moment to talk about his creation of new styles, and respect for the past.

Richard commenced learning the accordion when he was around four years old, introduced to it by his father, Lucien, who was also his first teacher. ‘You can see the small toy accordion in the booklet of my latest album, MOZART,’ he says, adding to an already impressive discography of over 50 CDs.

Spanning a number of decades, Richard’s career has encompassed many varied styles, as diverse as the musicians who inspired him growing up, Clifford Brown, Bill Evans, Errol Garner, Debussy and Mozart to mention only a few who Richard claims left their various impressions upon him.

Perhaps his most memorable encounter was in 1980, with none other than Astor Piazzolla himself, godfather of the modern tango. Piazzolla reinvented the tango as we knew it – and encouraged Richard to do the same with his native french musette. For Richard, innovation goes hand in hand with tradition.

‘Above all, it’s about a huge respect for the values of the past, the roots. Then we can expand it, open it to other influences, to other possibilities, other kinds of musicians (who come from both classical and jazz).

‘We must pay attention to the flame, and keep it lit.’

Richard is well-known for hopping across genres, performing Mozart one night, Edith Piaf the next. What ties it all together for him?

‘My aim is to love and want to play and write lots of different music. Playing classical music enriches me enormously, playing jazz or my ‘new jazz musette’ gives me the possibility to improvise freely, and composition lets me create pieces that are the fruits of all these experiences.

‘I find a unity across these different approaches. The connecting thread remains above all about beauty of sound, of melody, the richness of harmonies and of rhythm. All genres of music join together around these values.’

Richard’s appearance with the City Chamber Orchestra of Hong Kong is perfect example of this approach, the programme featuring Vivaldi, Piazzolla, and a waltz composed by Richard himself.

As a performer who can inhabit a jazz club and concert platform on consecutive nights, Richard comes into contact with a wide range of audiences, from the classical concert-goer to the jazz aficionado. Do these audiences differ? ‘They’re not too different. The sharing of emotion which drives music seems to me to be universal.’ 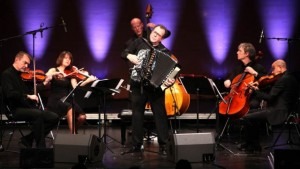 With a packed schedule for the foreseeable future, there’s no sign of Richard letting up any time soon. For him, his work is important in encouraging the next generation of accordionists:

‘I think my work has been that of a pioneer. I see many young accordionists from many countries follow in my footsteps. In the end, leading by example makes things possible, for them to realise their dreams.’

Unsurprisingly, such a dynamic individual doesn’t have a lot of downtime – but the relaxation he manages feeds back into his work.

‘Up until recently, I never really knew how to relax. My daughter advised me to do Tai-Chi. I think it’s a very good idea to find some serenity, a relaxation, which also helps me find a fullness in my playing.’