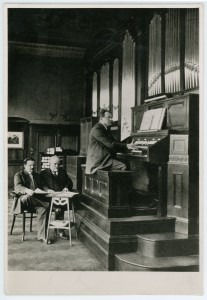 Already a skilled pianist and organist, young Max Reger (1873-1916) saw performances of Meistersinger and Parsifal during his first Bayreuth pilgrimage. “When I heard Parsifal for the first time, as a fifteen-year-old, I cried for two weeks, and then I became a musician,” he later recalled. His teachers Adalbert Lindtner and Hugo Riemann, however, quickly corralled Reger’s early enthusiasm for Wager. “Bayreuth is poison for him,” they proclaimed, “let him study Bach and Beethoven until he is able to write in a decent and cohesive fashion.” Although Wagner’s influence is still evident in Reger’s highly chromatic harmonic language, the young composer obeyed his mentors and abandoned the Wagner obsession. He turned his attention to Johannes Brahms, who Reger eulogizes as one of the “milestones of our music.” Reger even sent Brahms one of his early works, and the old master responded with great cordiality and expressed interest in the young man’s compositions. It is hardly surprising that Reger’s early compositions display more than a noticeable Brahmsian influence.

Max Reger: Violin Sonata in D Major, Op. 3
A Viennese critic candidly gave his impressions of the young Max Reger. “In so many ways he reminded one of a thick-set German student, who drank from morning until night, and wrote colossal fugues with three subjects. He resembled a nervous and incoherent Bach, producing music as incessantly as he smoked thick cigars.” Under the tutelage of Hugo Riemann, Reger fundamentally changed his musical outlook. “J. S. Bach needs to be the foundation!” he writes, “We will find maximum freedom only in the rebirth of Bach.” In no time, Reger became one of the foremost composers of organ music of the twentieth century, and by universal consent, the true heir to the traditions of Johann Sebastian Bach. Although Reger’s frequent “juxtapositions of distant keys invoke an iridescent harmonic idiom, often within a bewilderingly chromatic sound-world, the contrapuntal genius of his works for organ clearly reveal that he was singularly and profoundly influenced by the timeless legacy of J. S. Bach himself.”

Max Reger: Prelude and Fugue in E minor, Op. 69 No. 1 and 2
While the music of Max Reger simultaneously looks backwards to Bach and Brahms, it simultaneously also looks forward to Berg and Schoenberg. In fact, Reger proudly embraces both tradition and innovation. Alban Berg suggested, “Reger favors a rather free construction, which, as he says, is reminiscent of prose. This is the only reason for his music’s relative lack of popularity, neither of the other musical attributes of his thematic writing, nor his harmony, nor his contrapuntal writing, are likely to keep his musical language from being understood.” Composed in 1904, and premiered in Cologne on 15 October 1907, the Variations and Fugue on a Theme by Hiller, Op. 100 “constitutes a bridge between the developmental techniques found in Brahms’ Variations on a Theme of Haydn, Op. 56 (1873) and Schoenberg’s Variations for Orchestra, Op. 31(1928).” The work presents the theme based on a melody by the 18th-century composer Johann Adam Hiller, followed by eleven variations and a concluding fugue. Heavily influenced by Brahms in style and sound and Wagnerian chromatic harmony, the fugue pays unabashed homage to J. S. Bach.

Throughout his career, Max Reger had a highly acrimonious relationship with the musical press. Foremost among his critics was Rudolf Louis, who worked for the Münchener Neueste Nachrichten. He considered Reger’s music as belonging to a “cult of ugliness for its own sake.” After a particularly savage review, Reger famously responded, “I am sitting in the smallest room of my house. I have your review before me. In a moment it will be behind me.” Yet on very rare occasions, Louis was downright complimentary. Regarding the slow movement of Reger’s first clarinet sonata, the critic called it “one of the best pieces Reger has ever written.” The work premiered on 18 April 1902, and Adalbert Lindtner wrote, “…most of all we were delighted by the catchy and gracious second movement with its wonderfully sweet sostenuto episode, and the creator of this work, which is full of longing, sang himself into everyone’s heart.”