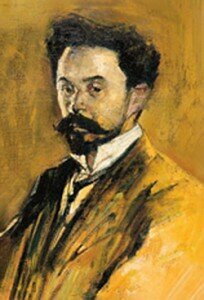 The music of Alexander Scriabin inhabits a distinctive, personal soundworld which is hard to define. It is the music of excess, ecstasy, tumult and passion. It is excessive, overripe, decadent, heavily perfumed, sensuous and frenzied, lacking in structure and sometimes downright bizarre. The music of extremes, it is “hyper everything”, and as such it defies description or categorization. Its language is complex, often atonal and frequently almost impenetrable. For some listeners, and artists too, it is this “over-the-top-ness” that is off-putting; for others, his sense of excess and rapture is compelling.

His personal life and outlook mirrored the excesses of his music: he was dissolute, he could be outrageous, he had high-falutin’ ideas of his own self-worth, and he believed music should be intimately connected to all of human experience. Perhaps this explains the breathless sensuality, the roaring passion and mystic spirituality of his music. All of human life is here: its ecstasy and agony, terror and beauty.

Despite his Russian heritage and a fairly traditional Russian musical training, Scriabin’s music is not noticeably Russian in its sound, and has no traits of nationalism, such as the use of folk idioms. In his piano music, he reveals himself as a master of the miniature, and while he wrote 10 piano sonatas – interesting in themselves as they chart his compositional development – his shorter works for piano, including salon morceaux, Poèmes and Études, and some 85 Preludes, distil in microcosm his unique style.

24 Preludes, Op. 11 No. 1 in C Major
24 Preludes, Op. 11 No. 16 in B-Flat Minor
The Preludes offer perhaps the best overview of his compositional development with clear signposts to where he was heading musically. The Op. 11 Preludes (1896) follow Chopin’s in their organisation (cycling through all the major and minor keys) and even make direct reference to Chopin’s music. Indeed, such is their closeness to Chopin’s model in style, texture and harmonies, many could easily be mistaken for Chopin’s own music. Some appear to “borrow” directly from Chopin – one opens with the unmistakable motif of the Marche Funèbre from Chopin’s B-flat minor Piano Sonata – while others seem more akin to Chopin’s Études in their technical challenges and sparkling passagework. The Op. 11, 13, 15, 16 and 17 are sometimes called The Travel Preludes, though they were not explicitly a travelogue by the composer; rather examples of how his travels around Europe allowed him to absorb different musical styles. (It is easy to forget, given Russia’s turbulent history in the 20th century, that at the end of the 19th century, the country was a major player in western European culture.) These Opuses also demonstrate how rapidly Scriabin’s musical style was developing at that time.

5 Preludes, Op. 16 No. 4 in E-Flat Minor: Lento
5 Preludes, Op. 74 No. 3. Allegro drammatico
The later Preludes are more redolent of Scriabin’s piano sonatas and show the influence of French music in their sensuous colourful harmonies and lush textures. All share one distinct characteristic: they are, in true Prelude style, short works, some so fleeting they last barely a minute. While his early to mid-period piano music makes use of the forms and structures Chopin favoured, already one hears the dark undertones and impressionistic colours and soundscapes which infuse his later works.

If anything, Scriabin’s late piano music is perhaps his most interesting, revealing his move away from the “pure” Chopin/Schumann/Liszt-influenced romanticism of the nineteenth century as he experimented with unusual harmonies (his “mystic chord”, derived from a dominant 7th) and atonality. In addition, seemingly random fragments of melody, fleeting filigree figurations, brooding dream sequences, haunting chromaticism, febrile episodes, and complex rhythms point towards Schoenberg, Messiaen and the avant-garde, and even jazz, and leave us wondering what Scriabin might have written had he lived longer into the 20th century.